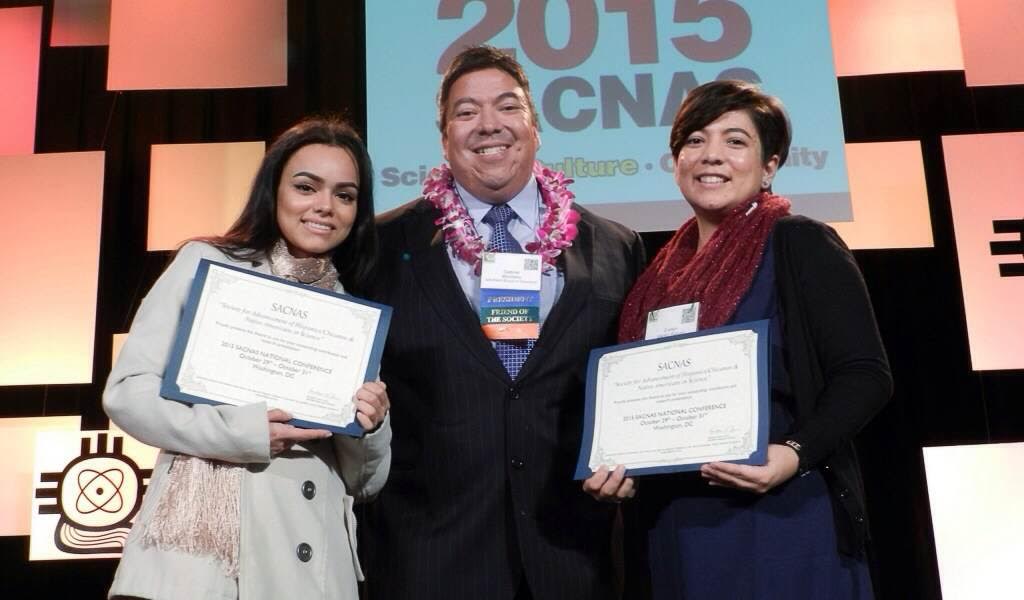 This past October, two Scholars Academy students, Kiara Arroyo-Andrade and Evelyn Valdez-Rangel won the poster presentation award for biology and botany, respectively, at the 2015 Society for Advancement of Chicanos and Native Americans in Science (SACNAS) conference in Washington, D.C.

At SACNAS, more than 4,000 student poster presentations, both graduate and undergraduate, were judged by some of the leading researchers in their fields. Both students were awarded for their outstanding poster presentation. Twelve other students represented the University of Houston-Downtown (UHD) and Scholars Academy as well, presenting posters in fields such as chemistry, math, and biology.

Andrade was able to perform research with the assistance of Mian Jiang, Ph.D, a professor in the Department of Natural Sciences. She worked alongside another fellow UHD student Mehmet Enes Inam and Antonio Tito, a Ph.D. student at UT Health Institute of Molecular Medicine.

They were guided and worked in Sheng Zhang's Lab. Their research titled, "Dysregulation of Dopamine Homeostasis Compromises Dopamine Neurons in a Drosophila model," focused on finding mutations that could lead to selective degeneration of dopamine neurons in the aging fly brain.

She conducted her research at the Tyson Research Center in Missouri in collaboration with Michael Tobin, Ph.D., assistant professor in the Department of Natural Sciences, and Scott Mangan and Claudia Stein, faculty from Washington University-St. Louis. Through her research, she found the presence and reduction in soil microbe diversity effect plant functional traits.

As dreamers, Andrade and Valdez set a prime example of the excellence a student can achieve despite their undocumented status. With the aid of UHD, and Scholars Academy, they are able to achieve and succeed in their career goals.