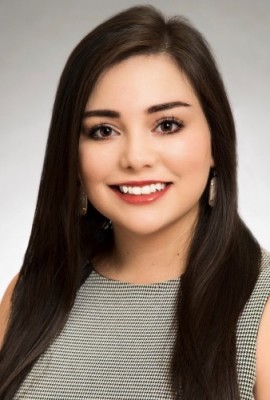 The Downtown Rodeo Parade rolled through downtown Houston this weekend. The popular procession spotlighted cowboys and cowgirls from throughout the region, as well as one University of Houston-Downtown Gator.

Alumna Yuselmy Garza was selected as one of the parade’s grand marshals. As a UHD business student, Garza was supported by a Houston Livestock Show & Rodeo (HLSR) Metropolitan Scholarship and Achievement Scholarship. She remains grateful to HLSR’s generosity and was honored to join seven other rodeo scholars who were selected as parade marshals.

“I had been in the parade previously as an undergraduate student and was invited back this year,” she said. “Then, I received an email letting me know that I was among the grand marshals! I had just told my husband that serving as a grand marshal was on my bucket list. It was very much a ‘wow’ moment.”

“We reached an extraordinary milestone in 2019 when we officially surpassed $500 million in our total commitment to youth and education since 1932, and we believe it’s only fitting to invite our Rodeo scholars to be at the forefront of the 2020 Downtown Rodeo Parade,” said Joel Cowley, Rodeo president and CEO in a statement. “To celebrate our 19,000 scholarship recipients, a Rodeo scholar representing each decade will serve as grand marshal, including our very first scholarship recipient from 1957.”

Although she has entered a new phase of her academic journey, Garza credits HLSR’s support of her undergraduate studies as helping prepare her for an MBA.

“I still remember getting that shiny packet in the mail letting me know that my undergraduate degree would be paid for,” she said. “Through HLSR’s generosity, I became the first in my family to graduate from college. Without that scholarship, I’m not sure how I would have accomplished that.”

Financial assistance aside, Garza also is appreciative of the guidance provided by HLSR’s scholarship committee and other members of the organization. She said the scholarship administration team was with her every step of the way and was available to answer questions and provide direction when necessary.

“HLSR is very much like a family,” she said. “The assistance I received as an undergraduate was amazing. And, scholarship recipients also have the opportunity to connect directly with donors. One of the scholarship requirements is to write letters to donors providing updates on our academic status. I would receive feedback … words of encouragement … which was particularly meaningful.”

Garza also is grateful for the many HLSR events that connected her with past scholarship recipients, including UHD alumni. Meeting those scholars and learning how they succeeded both academically and professionally was particularly inspiring, she said.

“HLSR provides its scholars with many tools to help them do well in school and ultimately, graduate,” she said.

Her gratitude to HLSR has helped open doors to several volunteer opportunities. Alongside her husband, Juan Garza (who also attends UHD as an accounting major) she welcomes HLSR attendees at the gates of NRG Park. She also serves as a scholarship judge, helping review the essays submitted by student applicants.

To those high school juniors and seniors planning for college, she recommends seeking out scholarships such as those offered by HLSR. She also encourages any high school student to identify a mentor to help review application materials and proofread essays.

Although the application process and essay composition were quite intensive, Garza said that she’s been rewarded with a college education and a lifelong connection to an organization that helps countless Houstonians achieve their academic goals.

“Although I graduated with my undergraduate degree, HLSR is still a big part of my life,” she said. “The rodeo is year-round for me now. It’s not only a part of my social life, but it consistently provides networking and professional development opportunities. I’m honored to be a part of HLSR and remain grateful for the support it has provided to me academically and professionally.”