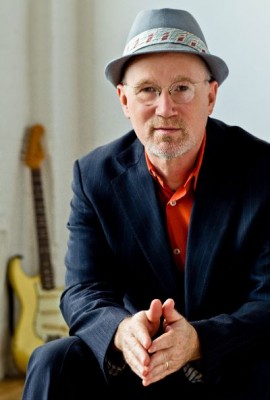 It was 1982. A new cable channel called MTV began to invade America’s cable systems. Popular music as we knew it would change … and so would the careers of many musicians, including Marshall Crenshaw.

Crenshaw, this week’s headliner at the University of Houston-Downtown Thursday Night Concert Series at Discovery Green, found himself on semi-regular rotation on the new video music channel. His catchy song “Someday, Someway” became a staple on MTV and helped propel Crenshaw to the national spotlight.

With short hair, glasses and dapper attire, Crenshaw was a bit of an anomaly on the music scene. His upbeat pop sensibilities had more in common with the sounds of the 1950s and ‘60s than the superstars of the day. Still, Crenshaw found plenty of fans with his self-titled debut album that delivered fun numbers like “Rockin’ Around NYC,” the Byrds-esque “Whenever You’re on My Mind” and the aforementioned “Someday, Someway.”

You won’t find Crenshaw on MTV these days, but his signature song “Someday, Someway” continues to be heard across SiriusXM.

Aside from that song, Crenshaw has amassed a collection of songs that reflect his passion for catchy pop songs, pulsated by hook-laden lyrics and jangly guitars.

The Detroit native has 10 studio albums under his belt and continues to tour the world.

Audiences at this week’s Discovery Green show will likely recognize his music and his face from appearances in films and TV shows. Crenshaw played his idol Buddy Holly in “La Bamba” and made an appearance in “Peggy Sue Got Married” (named for a Buddy Holly Song). He also performed the role of John Lennon in “Beatlemania” in the late 1970s and early ‘80s. And, many fans still recall a small but memorable part as a meter man in cult kids’ show “The Adventures of Pete & Pete.”

UHD News caught up with Crenshaw fresh off a gig in Arlington, Texas to talk music, movies, and Texas.

UHD News: You’re playing several shows in Texas this week. Do you enjoy playing for audiences in the Lone Star State?

Marshall Crenshaw: Of course. Texas has a rich musical history. I have to love it because that’s where one of my heroes Buddy Holly is from. My cousins had the records, and I used to listen to him on the radio. And, I saw him on the “Ed Sullivan Show” when I was a child.

But, there’s so much more. There’s no end to the depths of the musical legacy of Texas.

UHD News: Speaking of Buddy Holly, you played him in “La Bamba.”

Crenshaw: And I was in “Peggy Sue Got Married” that came out around the same time. That didn’t have much to do with Buddy Holly but was named for one of his songs. It’s interesting because that song was written after having a flurry of hits over a nine month period. He was somewhat in a slump around that time … scratching his head and trying to figure out how to get back in the game.

UHD News: You also played another rock legend in “Beatlemania.” What was that experience like?

Crenshaw: It was a life altering thing when that happened. I traveled the country and made some good friends with that show. I got to hate it after a while. I had to do the same thing each night, which became a drag. But looking back at the experience, I have many good memories.

UHD News: When you broke into the business, you were a bit different than the other musicians that were on the scene. How would you describe your sound in the early 1980s?

Crenshaw: It was a combination of all kinds of things. I was trying reflect the music from the ‘50s and ‘60s that I grew up loving … and still do love. I guess I was different from other people who were around because I was very much into music before I became a musician. Many of my peers were inspired by the Beatles after they appeared on “The Ed Sullivan Show” but I was already on board before they were on TV. And, I was in New York and enthralled with the city and its music. I was all over the map with what I listened to. I listened to the stations that played new wave, urban music, and Caribbean music. You can find a bit of everything in my music, but it’s very much all rock n’ roll.