In 1995, Gallegos was the first Hispanic elected to the State Senate from Harris County. He represented Houston's Senate District 6 for 17 years. Prior to that, he served two terms in the Texas House and 22 years as a firefighter and Senior Captain with the Houston Fire Department. He received a Bachelor of Arts degree in social sciences from the University of Houston-Downtown (UHD) in 2001 and walked the graduation stage with his daughter, Ali.

"Mario Gallegos was a great supporter of UHD and education in Houston and Texas," said William V. Flores, UHD president. "He was instrumental in passing legislation that led to the construction of UHD's Shea Street and Commerce Street Buildings, paving the way for us to create new academic programs and serve a greater number of students. He was an ally and a friend and will be greatly missed."

In 1993, then-Representative Gallegos successfully requisitioned $22 million for UHD as part of the South Texas/Border Initiative, which provided upgrades to universities across the Rio Grande Valley.

According to a statement from State Representative Garnet F. Coleman, Gallegos was "a fearless Texas Senator who believed in the importance of education, civil rights, and healthcare for our state and our city. When he was in his 50's, Mario gathered the courage to return to college and graduate from UHD, demonstrating to his constituents both the importance of earning a college degree and that it is never too late to do so."

On Sunday, Oct. 21, visitation will begin at 4 p.m. at the University of Houston's Cullen Performance Hall. Rosary begins at 6:30 p.m.

The funeral is scheduled for 9:30 a.m. Monday, Oct. 22, at the downtown Co-Cathedral of the Sacred Heart, 1701 San Jacinto. A reception will follow at the Communications Workers of America union hall, 1730 Jefferson. The burial will be restricted to the family. 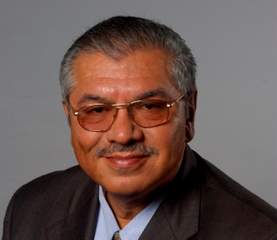