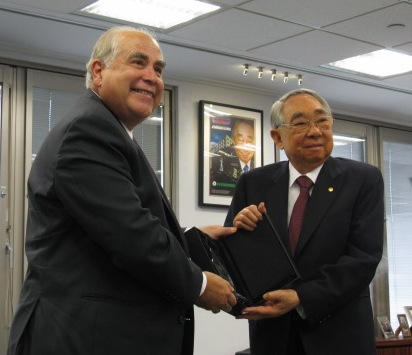 It is with great sadness and heavy hearts that we report the passing of Dr. Yung-Fa Chang on Wednesday, Jan. 20 at the age of 88.

Dr. Chang was the founder and chairman of the Evergreen Group and a continual supporter of the University of Houston-Downtown. He was an influential and exemplary entrepreneur and philanthropist.

The son of a seaman, Chang began his business almost five decades ago with the purchase of a used cargo vessel. He grew his business and established the Taipei-based Evergreen Group, Asia's largest container fleet operation, Evergreen Marine Corp., EVA Airways Corp., Evergreen Sky Catering Corp. and Evergreen International Hotels. Chang wrote in his 1997 autobiography, "The oceans and ships occupy very important places in my life, I am a natural-born son of the ocean."

Born in 1927 in Taiwan's northeastern coastal town of Suao, Chang was the third of seven children. While a teenager, he began work as a clerk for a Japanese shipping company while attending night school and went on to spend 15 years as a sailor, rising to the rank of captain.

In 2011, Dr. Chang established the Yung-Fa Chang Grants-In-Aid, a scholarship endowment for UHD students with limited financial resources. Chang's connection with UHD was encouraged by Professor Hsiao-Ming Wang, Ph.D., professor in criminal justice and director of UHD's Bayou Connection Program. Chang viewed UHD students through the lens of his own very own humble beginnings and understood their challenges.

"I've known Dr. Chang for more than 10 years," said Wang. "I have visited him annually to report on his UHD scholarship and the progress of UHD's Bayou Connection program. He was a hardworking and honest gentleman. Being a worldwide, well-known and successful entrepreneur, his concern was people in need — not only in Taiwan but also around the world, including Houston."

UHD President Dr. Bill Flores had the privilege of meeting Dr. Chang in 2011. "Through his establishment of the Yung-Fa Chang Scholarship Endowment, our students have been able to pursue their degrees and others will benefit from his generosity in future years. We are grateful to have known him and to have these scholarships as a memory of his generosity. "

Dr. Chang will be sorely missed and remembered by all.