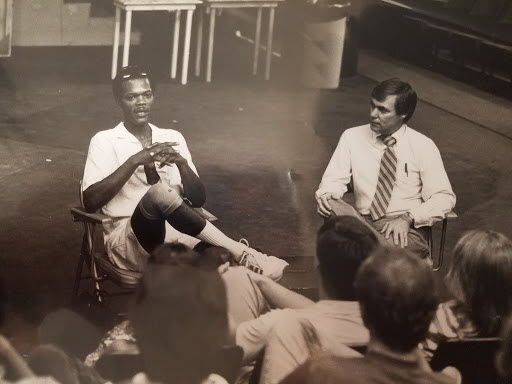 By way of New York in 1982, the Negro Ensemble Company arrived in Houston for a two-week engagement at the Alley Theatre. The Company was in town, as part of a four-month international tour, to perform "Home" by American playwright Samm-Art Williams.

The star of the show was then-aspiring actor Samuel L. Jackson.

Jackson was serendipitously connected to UHD's O'Kane Theatre director Dr. Tom Lyttle, who persuaded the 34-year-old actor to give a theater master class. A University photographer was able to capture this special moment in time.

Unbeknownst to Lyttle's students, this master class featured a future superstar. Jackson went on to international stardom with more than 150 films—and counting—to his acting credit.

The class was long forgotten by the time the photograph made it to the UHD Archives in 2013; but it remains a special nugget of memorabilia about the University's dedication to providing unique learning opportunities to enhance our students' educational experience.