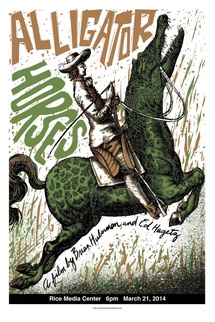 You have heard of Davy Crockett, "King of the Wild Frontier." Alligator-Horses tells the story of David Crockett, the U.S. congressman who, years before his famous stand at the Alamo, campaigned against Andrew Jackson and fought for the cause of the poor in West Tennessee.

Alligator-Horses, a feature-length documentary film by Brian Huberman and Ed Hugetz, presents a vivid collage of stories and interviews with scholars and historians that reveal the 1830s as a pivotal decade in American history, when a growing underclass first began to struggle against the invisible grip of the "aristocracy" and emerging industrial capitalism.

Retracing Crockett's political tour of the Northeast and examining the comic almanacs that first popularized him as an urban working class hero, the film recounts lesser known events from the "Age of Jackson," including early labor strikes organized by women, the rise of the blackface minstrel show, anti-abolitionist riots in New York, and the scandalous murder of a prostitute that evolved into something like an O.J. Simpson trial of its time.

In our present decade, the "Occupy" movement speaks out against man-made forces that create income inequality and secure the status of the "one percent." Alligator-Horses argues such a division has been present in America for almost 200 years, since a time when the national identity was in the midst of an ornery, anarchistic adolescence.

This experimental documentary, 14 years in the making, may look at a small slice of the American story. But in its weave of past materials into the present, it gives us a larger scope through which to examine history--and, by extension, ourselves.

The premiere screening of Alligator-Horses will be Friday, March 21, 2014 from 6 - 10 p.m. at the Rice Media Center (on Rice University campus). Enter campus at University Blvd. & Stockton Dr. Admission is free and open to the public.

Brian Huberman, associate professor of film at Rice University, is a working filmmaker interested in American history, Western film, the myth of the frontier and its complicated heroes. His work has been screened internationally both on television and at festivals. Selected titles include Citizen Provocateur: Ray Hill's Texas Prison Show; John Wayne's The Alamo; and Return of The Texas Chainsaw Massacre: The Documentary. Selected production credits include director of photography for directors James Blue, Kim Henkel and Eagle Pennel.

Ed Hugetz is Interim Provost at the University of Houston Downtown. His background is in documentary filmmaking. His television series "The Territory," has enjoyed over three decades of showcasing experimental and documentary films. The series has been supported by the National Endowment for the Arts, the MacArthur Foundation, and others. Mr. Hugetz has also served as President of the Board of the Independent Television Service (ITVS) which supports documentaries produced for PBS.

Huberman and Ed Hugetz have been collaborating on film projects since the 1970s. Among others they have created The De La Peña Diary (2000), about the controversial written account of a Mexican citizen who may or may not have witnessed, first hand, the death of Davy Crockett at the Alamo; To Put Away the Gods (1983), about the Lacandon Maya Indians of Chiapas; and Who Killed the Fourth Ward (1978), which examines the price of progress when in an inner city neighborhood in Houston is gentrified.