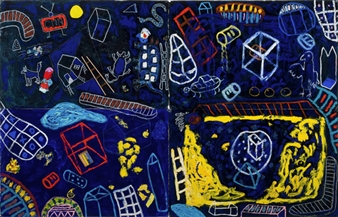 UHD's own Professor Floyd Newsum recently had a second painting acquired by the Smithsonian National Museum of African American History and Culture. According to Newsum, the first ("Sirigu, Janie's Apron") was acquired in 2012, and the second ("After the Storm") was gifted to the institute by a collector this year.

Born in Memphis, Newsum attained his B.F.A. from Memphis College of Art and finished with a Master of Fine Arts degree in painting from Temple University in Philadelphia before moving to Houston. Newsum has been a professor of painting and drawing for over 30 years. His works grace numerous public spaces such as the Main Street Square Station in Houston and the Hazel Harvey Peace Building in Fort Worth. Many public institutions including the Museum of Fine Arts Houston and the Philadelphia Museum of Art have acquired his work.

Employing what at first glance appears to be a primitive and childlike style, Newsum invites us to consider a distinctly sophisticated idea: the difference between and relationship of the painted mark as its own agent and the painted mark as an element of a picture. Newsum's mark-making orchestrates a visual narrative of his own iconography, rhythmic movement, and impassioned colors to realize a personal account of humanity set in the universal language that is art. Inherently political, the work leads us from the multiple identities of a paint stroke to the multiple identities of the events and people in a political and cultural system. Each is its own agent and each is a part of the whole, with the roles ever alternating. Thus, he creates a synthesis of the consciously primitive and intellectually modern that speaks to who we are as a people.