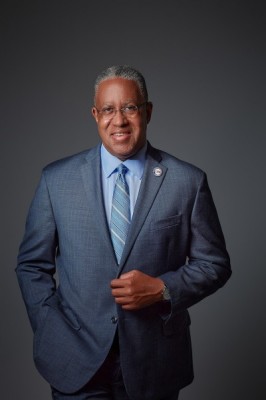 I want to offer my early best wishes to students scheduled to graduate this month as well as to share details on our 71st Commencement on Saturday, Dec. 18, at NRG Stadium.

Today, I am pleased to announce that our Commencement speakers have been confirmed, and we have two dynamic leaders ready to inspire our graduates for the morning and afternoon ceremonies.

City of Houston Mayor Sylvester Turner will address audiences during the 8:30 a.m. ceremony, recognizing graduates from the Marilyn Davies College of Business and the College of Sciences & Technology. Before his time as Houston’s mayor, Turner spent 27 years in the Texas House of Representatives serving District 139. As a Texas Representative, he worked on the House Appropriations Committee for 21 years and served as Speaker Pro Tempore for three years.

Texas Senator Carol Alvarado will join us for the 2 p.m. event, spotlighting the achievements of graduates from University College, the College of Public Service and the College of Humanities & Social Sciences. Senator Alvarado represents District 6 and previously served in the Texas House of Representatives for five terms, representing District 145. She is also a former member of the Houston City Council.

Both Mayor Turner and Sen. Alvarado are longtime friends and supporters of the University of Houston-Downtown and routinely visit our campus. I know both will share inspirational messages to our upcoming graduates based on their unique experiences in service and leadership to the Houston community.

I am pleased to announce that Texas Senators Alvarado and Borris Miles will receive the President’s Medallion during the ceremonies. Senator Miles is a lifelong resident of Houston, a successful businessman and real estate developer. He served four terms in the Texas House of Representatives before being elected to the State Senate.

The President’s Medallion, created in 2019, is awarded at the discretion of the UHD President to individuals or organizations distinguished by their service to the University Community. Both Senators Alvarado and Miles have earned this honor for their dedication to UHD and the city, and I look forward to bestowing this recognition on them.

As the special day draws closer, refer to the Commencement webpage for updates and additional information related to graduation exercises.

Beyond our graduates, our speakers and our medallion recipients, this Commencement is particularly noteworthy as it marks our return to regularly scheduled graduation festivities since the pandemic began. This will be a memorable time to be surrounded by friends, families and colleagues who helped make this occasion possible — and it marks a return to being celebrated in person.

Once again, congratulations to our fall 2021 prospective graduates!