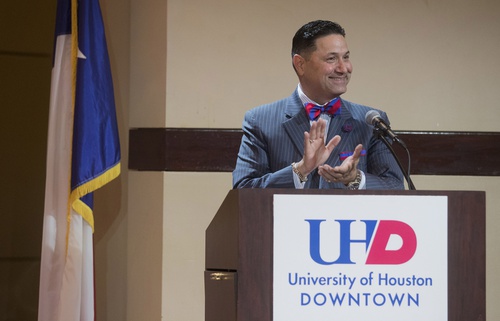 Since taking the reins as University of Houston-Downtown President in April, Dr. Juan Sánchez Muñoz made his first Report to the Community on Oct. 23 as part of the Invest In Blue events held this week.

Interim Senior Vice President for Academic and Student Affairs and Provost Ed Hugetz, who served as event host, welcomed guests and members of the campus community.

"When I first met Dr. Muñoz, I was convinced of one thing…that he had UHD in his heart," said Hugetz. "His spirit, background and life experiences are so intertwined with UHD…it's like that he was born to be president of this University. I see nothing but a better future with his presidency. His presence over the past seven months is very much like the agenda for Invest in Blue…it's all about bringing everyone together through his enthusiasm, energy and a desire to connect.

Before beginning his address, Muñoz premiered the latest UHD commercial, which he felt captured the "renewed energy and optimism of what's happening on our campus and offer the city a fresh insight on our University."

The President continued with how the University community came together and responded after Harvey in August and early September. He expressed gratitude to those who contributed to the Gator Relief Fund, which raised $53,000 and how the University created a separate fund to support faculty and staff in need. In all, UHD assisted 349 faculty, staff and students through these funds.

"At UHD, we're more than just faculty, staff, students, and alumni," said Muñoz. "We're not a small University by any means, but it's hard not to become friends with fellow Gators. We're a community…a family, which was most evident during Harvey."

He commended the ride-out teams who spent days and nights on restoring campus for a Sept. 5 opening. Muñoz recognized the Student Affairs team that worked one-on-one with students seeking support following Harvey whose efforts kept many students in school; and the deans, chairs and faculty members who are continuing their work with students as they balance coursework and recovery from the storm. Muñoz also acknowledged the efforts of UHDPD Chief Michael Benford and his team; University Advancement/University Relations communications staff; and the Facilities Management team.

"These are just some of the men and women who spent time away from their own homes and families during the storm to ensure we could return to work and provide our students with a high-quality education," Muñoz noted. "These UHD personnel, and others have what I refer to as Gator Grit—a toughness, a resolve to get the job done, a dedication to our institution and others."

Muñoz expressed his excitement about the future of the University—from the new College of Sciences & Technology Building to commemorating an institution milestone with the official signage for the Marilyn Davies College of Business.

"Marilyn's gift was finalized on the day I was confirmed as UHD President," he said. "This gift is further proof that great Houstonians, like Marilyn, want to support our University. We are grateful for her belief in UHD."

Muñoz noted that UHD has benefitted from its most successful fundraising year—more than $13 million was raised by the University Advancement team—is the foundation for the University's capital campaign: UHD, Here We Go.

"These gifts have put us on track for an ambitious, yet attainable capital campaign—our first in nearly 20 years," he said. "Our campaign goal of $25 million by 2020 to support student success, faculty development, community engagement and campus expansion are vital to our mission."

He encouraged faculty and staff to realize that the entire Gator community plays a part in this effort and makes an investment in UHD and the students.

"Whatever your role at UHD is, continue it with pride," he said. "Whether you're engaged in scholarly research or help keep our campus clean, your hard work makes a difference as we move toward this goal."

According to the President, investment in UHD goes beyond the walls of the institution thanks to state and federal agencies and organizations that are investing in our faculty. He noted that in the first six weeks of Fiscal Year 2018, our faculty brought in more grand dollars than in all of Fiscal Year 2017. He applauded the faculty for their research efforts.

Muñoz stated that the institution's progress over the past year wasn't limited to fundraising and research efforts. In the areas of retention and graduation rates, he noted that both have been the highest in the history of the University.

"UHD has made unprecedented gains with regards to both of these areas," he said. "Our next strategic focus will be to increase enrollments. We have the resources, personnel and programs to make this happen through the new Gator Gateway program. Our students are excited to be here, ready to learn and prepared to take their education and lives to new levels."

Gator Pride is what Muñoz said he felt when UHD's Supplemental Instruction Program received a Recognition of Excellence from the Texas Higher Education Coordinating Board (THECB) as well as the THECB and the University System Board of Regents recognition of the University's Course Innovation Initiative as a finalist for the statewide STAR Award.

"It is high praise when the state's authority on higher education and our Board of Regents jointly recognize your institution," Muñoz said. "Clearly, UHD is moving in the right direction."

In closing, Muñoz praised faculty, staff, students and a supportive external community, which has made a difference at UHD.

"As I conclude my seventh month as president of the University of Houston-Downtown, much has happened in that time," he said. "Your unwavering commitment to UHD, our mission and success has helped us overcome challenges, such as Harvey and earn the admiration of legislators, leaders in higher education and many more. That's the product of talent and true Gator Grit."

The Invest in Blue celebration continued this week with the signage unveiling of the Marilyn Davies College of Business followed by the Vision & Welcome Event.