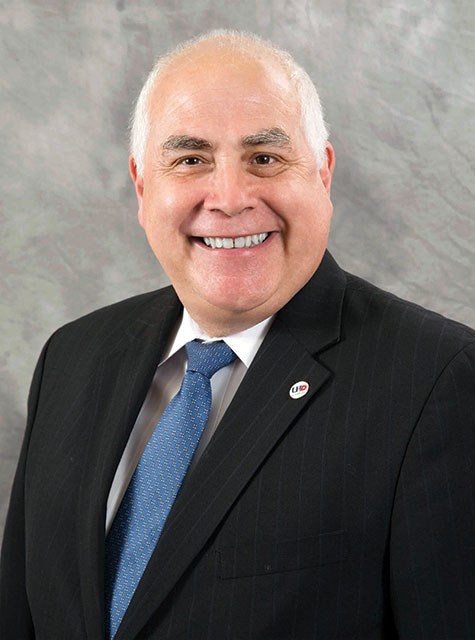 At this week's fall convocation, President Bill Flores thanked faculty and staff for their hard work and progress in achieving some of the University's 2020 strategic plan priorities, and also challenged each employee to continue placing retention, graduation and overall student success as their highest goals for the coming year.

Flores noted that this fall represents the beginning of a landmark year for UHD, one that can forever change the character and reputation of the University. This semester's entering freshmen class is the first admitted under UHD's new admission standards. Those who were automatically admitted have an average S.A.T. score of 924 and the average S.A.T. score for the entire class is 900, which is significantly higher than expected.

He shared several current initiatives the University is taking to boost student success for these first-time-in-college students, as well as for returning students and transfer students. First, he applauded faculty for their continued efforts to improve class attendance, as national research indicates the significant impact regular attendance has on student persistence and graduation. Secondly, he asked faculty to incorporate early testing into each course to ensure that students who are not grasping foundational material will have the time and additional attention from professors to complete their classes successfully.

He shared that, for each 1% increase or decrease in total semester credit hours, the University gains or loses approximately $700,000. He explained that these funds could be allocated for student support initiatives, new Student Affairs staff, faculty positions or other important resources.

Flores noted that increased retention and graduation rates are important - not just for UHD - but for the state, as well. He explained that performance-based state and federal funding may soon be adopted, which could benefit or hamper UHD, based on its retention and graduation rates. He mentioned that each faculty and staff member plays an important role in meeting this challenge head on and overcoming it.

To help in this effort, Flores shared that UHD is committed to hiring new undergraduate and graduate advisors to greatly reduce its student-to-advisor ratio, which has improved from 1 to 800 last year to below 1 to 500 this year.

Flores also updated faculty and staff on the new degrees UHD is offering students this year and in the coming months. For example, this fall the University welcomed the first cohort of students in the new master's in non-profit management and also established a new master's degree in rhetoric and composition. UHD also is adding new baccalaureate degrees to meet workforce demands. In spring 2014, students will graduate from UHD's new bachelor's degree in geosciences and a B.A.A.S. in petroleum technology has been approved by the provost council and will go before the board of regents in November for approval.

The president shared exciting news on enhanced academic programs and curriculum changes for the coming year. He mentioned a new Honors Program, which will admit its first students this fall, and updated attendees on the faculty's hard work to completely revise the core curriculum by fall 2014. Through this comprehensive project, professors are working to incorporate more 21st century capabilities - such as critical thinking and problem-solving skills, the ability to work in teams and communication skills - that are critical to students' success, both in and outside of the classroom.

Flores also underscored the significant impact of high-impact practices, such as undergraduate research and capstone courses, on students' overall satisfaction, persistence and graduation. He applauded faculty and staff for their contributions to increase high-impact practices on campus.

He reiterated the University's contribution to community service and the great benefit of UHD's civic partnerships for its students, faculty and staff, as well as for Houston. He explained that the newly created Center for Public Service and Family Strengths will help to extend the University's collaborations in the community and he encouraged all faculty and staff to participate in Houston's Citizenship Month in November.

Finally, Flores shared a rendering of the University's new faculty/staff parking garage and Welcome Center, which is set for completion next year.

In closing, he mentioned the University's upcoming 40th anniversary, and noted that it is time for UHD to honor its diverse past, while planting a flag for the future.

"We are making progress in achieving our strategic plan goals - and we still have some key things to work on moving forward," said Flores. "We are all in this together. Working as a team, we can transform UHD into a stronger university for the future - focused on retaining, graduating and supporting student success."