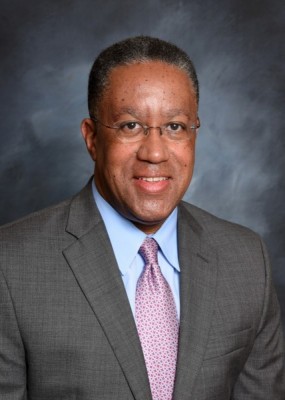 As University of Houston-Downtown President Loren J. Blanchard was preparing to undertake the responsibilities of his office, he committed to listening and learning from the University Community. He made good on that promise by launching a “Listening Tour,” providing an opportunity for constituents to share thoughts, ideas and visions for UHD during a series of forums taking place both virtually and in-person.

President Blanchard started with the University’s most significant resource – its student body – during two sessions on the week of April 19.

“Students are one of the most important groups. They’re in the seats and can let us know if our academic fortitude is where it needs to be. I’m also interested in areas for improvement. I want to celebrate all the great work underway and build upon it. I also want to know if there are areas that aren’t working well and that we need to play close attention to from the varied perspectives of our campus community, beginning with our students,” he said.

Facilitated by Dr. Creshema Murray, Associate Professor of Corporate Communication and Special Assistant to the Office of the President, and Dr. Liza Alonzo, Director of Events and Alumni Relations​, the discussions focused on four main questions:

Approximately 40 students attended each session, offering their candid feedback. The students offered high praise for the University, referencing feeling welcomed on campus, the flexibility of classes and professors, the wealth of diversity, its affordability, and its accessibility. One student remarked in the comment box, “UHD just cares...I've never been at a University like this one.”

Students also shared areas where they would like to see growth and improvement, including wanting more opportunities for civic engagement, increasing the awareness of student resources to benefit degree completion, a desire to capitalize on UHD’s proximity to Downtown Houston, and a need for more merit-based scholarships.

President Blanchard ensured students that their comments are helpful. “I want to learn as much about UHD, and who better to learn from than students? As our students graduate, they become our shining stars for the city and state workforce and leadership corps. Students’ feedback allows us room for growth in many ways, which is why I’m listening carefully. What they share with me can impact the future of UHD and the city of Houston,” he summarized.

Students may take part in future Listing Tour dates on May 18 and May 26. Students unable to join the forums may share comments and thoughts via an online survey.

The Listening Tour runs through early June, with several additional dates for faculty (May 6 and 13), staff (June 3 and 8), and the UHD Community (May 18) to attend. More information about attending these sessions is available online.