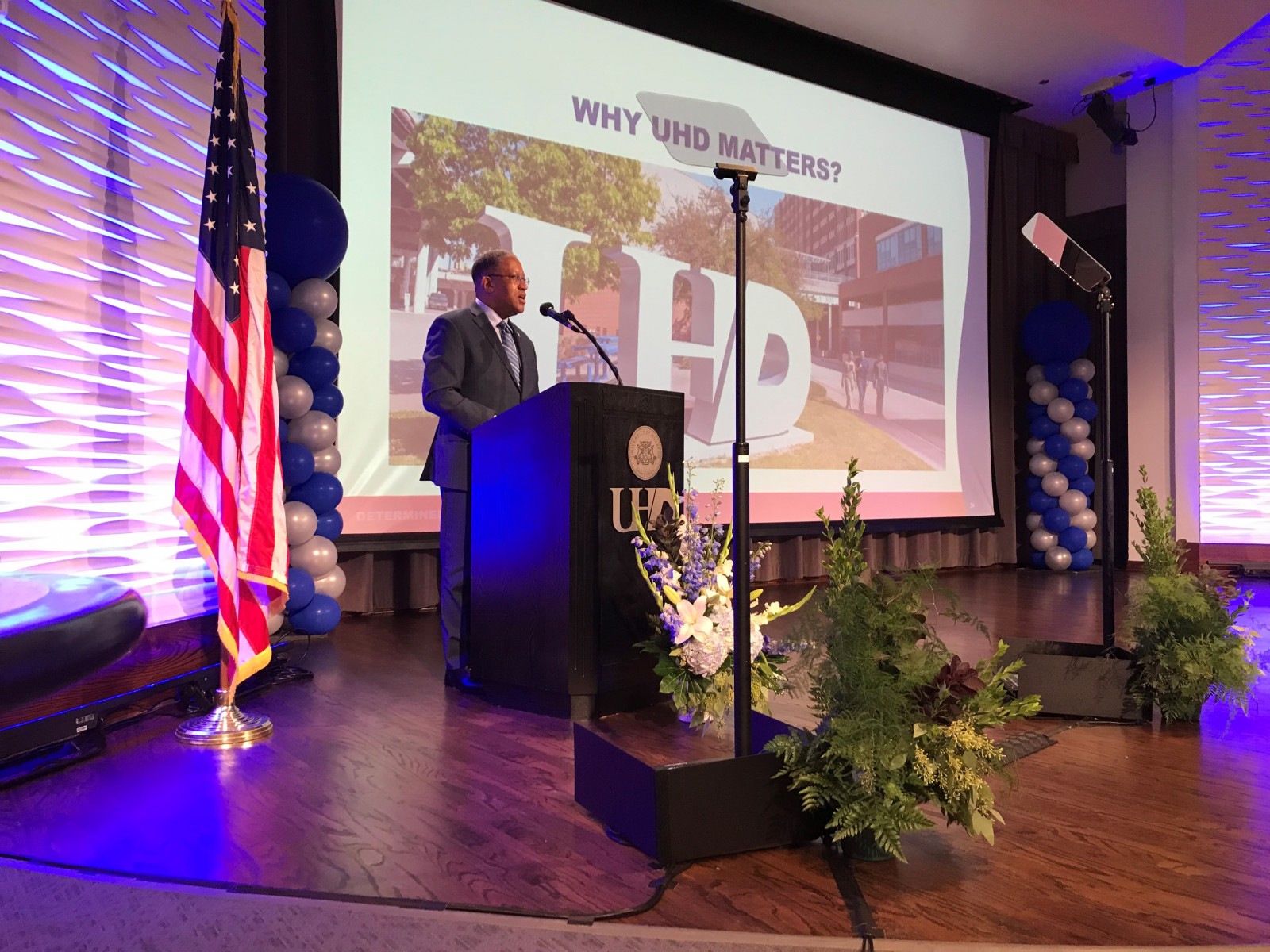 State of the University Address

On Sept. 8, President Blanchard addressed stakeholders virtually and in-person during his inaugural State of the University Address. During the presentation, he shared the knowledge gained during his comprehensive Listening Tour and outlined key priorities for the University among other topics.

"This discussion will provide food for thought as we answer some very important questions … including 'Why is the University of Houston-Downtown important to our city ... our state … and the community we serve?'" Blanchard said. "In essence, we must answer the question of … 'Why UHD matters?'"

In summarizing the Listening Tour, Blanchard acknowledged that he connected with 1,100 stakeholders, including both internal and external constituents, as well as 140 community leaders. He also paid visits to The Ion, which combines the expertise of area universities with area business leaders, and the Downtown Launchpad.

What he learned is that the University is ascending through its footprint in the community and through its nationally recognized degree programs. Additionally, the Listening Tour revealed that UHD is poised for further growth as resources are being refocused on bolstering graduation and retention rates and the University continues to strive for enhanced services to its students.

"It is imperative that current and prospective students be provided with fast, efficient and knowledgeable service," Blanchard stated. "Let's consider that the college experience is life-changing to say the very least … our service on campus, online and over the phone must reflect that."

UHD must also overcome barriers, he said. Through Listening Tour feedback, Blanchard recognized that the University must continue to communicate its value as an institution of higher education to Texas legislators. In doing so, he is optimistic that UHD can benefit from more equitable state funding.

He also noted the opportunities that await the University.

The information gathered from the Listening Tour, he said, will help support the University's Strategic Plan for the next 5 – 10 years. It is documented on the new Listening Tour website.

It also will support UHD's journey forward, which will be navigated through what he deems an Institutional Compass.

This Compass, he said, will steer the University toward key priorities or "Four Points of Excellence." These points are:

In detailing UHD's commitment to justice, Blanchard cited a number of community initiatives UHD Community members are involved with including the upcoming GatorServe Day of Service on Sept. 11 and alumnus Jatin Patel's efforts in the community supporting the homeless and those in need. He also addressed the University's response to Hurricane Ida and how students, faculty and staff came together to help Louisiana students last week.

With regard to student success and equity, he reminded the audience that everyone plays a role in supporting students' persistence. From the time they enroll to the moment they cross the Commencement stage, everyone bears a responsibility for their success, he said. In outlining the success of the institution and its infrastructure, he referenced UHD's ongoing efforts to compensate faculty and staff equitably, including the recent Market Study undertaken by Employment Services & Operations. Additionally, he cited the recent Faculty Retreat and upcoming Staff Convening as examples of promoting personal and professional growth among the University's employees.

President Blanchard also expressed that UHD should continue to serve as both a stage and a player in citywide intitiatives that promote civic engagement and community growth. The University must assert its presence within the community as an anchor institution to further demonstate its intellectual and creative capital to the region, as well as its role within the fourth largest city in the U.S., he said.

Toward the conclusion of the address, President Blanchard circled back to the question posed at the start of the program, "Why UHD Matters?"

He acknowledged that the query might be too broad for one answer but said UHD is a University to which he is deeply connected.

"I see UHD as residing within the temple of my familiar … to borrow a quote from the Alice Walker novel," he said. "The students are hardworking … its campus community is committed to their success … it is engaged in the community … and the institution as a whole plays an integral role in providing access to higher education within our city and state."

He added that the University's new branding campaign (Determined, Dedicated, Downtown) underscores his appreciation for UHD and how Houstonians view this growing institution.

In attendance at the event were UHD alumni such as former University of Houston System Regent Paula Mendoza (who also hosted the event) and Texas Rep. Mary Ann Perez. University of Houston System Regents Jack Moore, Durga Agrawal and Derek Delgado also attended. Additional distinguished guests included UHD donors Marilyn Davies (namesake of UHD's Marilyn Davies College of Business) and Mark Mallet, whose gift to UHD created the Mark and Tami Mallett Grand Lobby in College of Sciences & Technology Building. Bob Eury, CEO of Central Houston, was also on hand to deliver remarks on introduce President Blanchard. Singer and former America’s Got Talent contestant Christina Wells (who performed at the Fall 2021 Commencement Ceremony) warmed up the audience with a rendition of “What a Wonderful Life” and helped close the program with “The Greatest Love of All.”