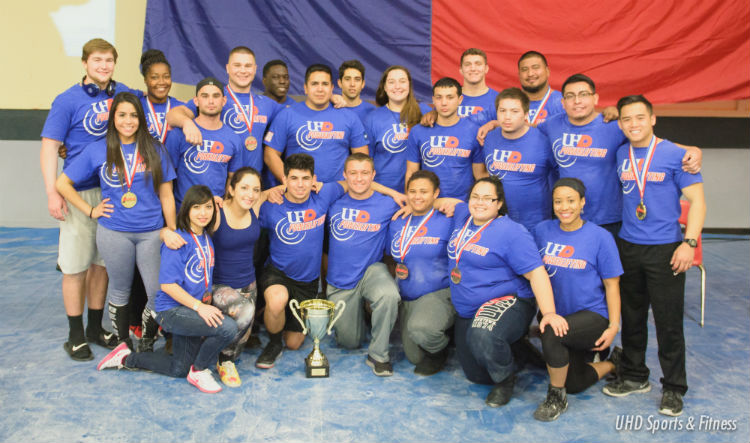 Success is appreciated most when it is achieved in the face of adversity. UHD Powerlifting coach John Hudson has long been concerned that the UHD Mens' Powerlifting squad has tasted too much success and not enough adversity. "Adversity is what makes a good athlete--and a good team--hunger for and crave success," says Hudson.

While the UHD Powerlifting Women's squad performed extremely well in their competitive debut at the USAPL Texas Collegiate Regional Championships on December 6 in San Antonio, the UHD Powerlifting Men failed to defend their Regional title but came away with lessons learned and a renewed hunger to succeed.

This meet marked the first time that UHD Powerlifting has had enough women on the team to enter a women's squad into competition, although the women's lineup still has four weight classes with no coverage: 94.8, 114.6, 125.7, and 138.9.

For the UHD Men's squad, the meet was a lesson in the importance of fundamentals, including making weight class and using good form. Some team members did not make their target weight and had to lift in higher class, resulting in loss of team points.Others failed to complete their sets and were disqualified from the competition. There were some wins, though. Sophomore Kenny Nguyen of Dickinson won the 145.5 weight class with a 1421.9 total and a new American Collegiate Record Bench Press of 451.7. For his efforts, Kenny won a prestigious "Best Lifter" trophy for Lightweight Men.

The UHD Men finished at third place behind Texas-San Antonio and Texas, respectively.

Next up for UHD will be the 2015 USAPL Aggie Showdown on February 21, followed by the USAPL National Collegiate Championships in Atlanta on April 10-12.