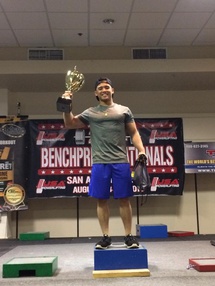 At the Championship, Nguyen earned a score of 468, which actually exceeds the current Teen World Record by 80 pounds. He is the first teen in the history of the USAPL to win the Open Division title in his weight class.

According to Coach John Hudson, "With this performance, he established himself indisputably as the best 145-pound bencher in the world in the Teen and Junior divisions.

"Kenny made a huge statement with his victory. At the World Championships next year, Kenny has the opportunity to become the greatest overall Teen/Junior bencher in the world regardless of weight class."