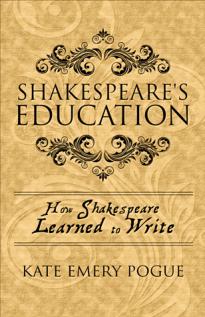 According to Pogue, ""Shakespeare's Education" brings to life the educational experiences of boys in 16th century England. Monarchs from Henry VIII to Elizabeth I established hundreds of schools, and formulated a curriculum based on Latin, the reading of classical literature, and the performance of recitations and plays. This system educated Shakespeare and his contemporaries Christopher Marlowe, Ben Jonson, and thousands more. It became the matrix for one of the world's great periods in theatre history. More important, it helps us understand the writing of Shakespeare, the greatest playwright the world has seen."

She said, "I was particularly eager to research and write this book because of the number of Shakespeare conspiracy theorist who claim he did not have the education needed to write his plays. As I worked I was fascinated to find so many records and so much material about education in Tudor England -- its origins, philosophy, and theories -- and to compare Shakespeare's education with what children experience in the 21st century as they go through school."

To purchase your copy of the book, visit the publisher's website here. PublishAmerica is also offering a 20 percent introductory discount with the code: Discount20.