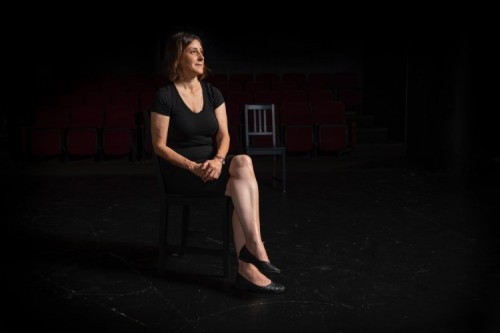 Since the age of 6, Pamela Vogel hasn’t left the stage.

Her first acting gig was a particularly concerned pilgrim waving before the arrival of the Mayflower.

The budding actress’ favorite role as a child? A narrating rock in a fairy tale, of course.

“I was hooked from the first school play performed by eighth graders,” said UHD Fine Arts faculty member Vogel, who stars in next month's production of "Wit" at Houston's Midtown Arts and Theater Center Houston (MATCH). “By the time I reached seventh and eighth grade I was ready. I just knew that I could pretend like that.”

By high school, Vogel’s parents were driving her to every high school performance, competitions and community theater productions.

In her junior year of high school, the Chicago Academy for the Arts was opening its doors for the first time. The burgeoning performing and visual arts high school accepted Vogel as one of the first 50 cohorts. [The Academy is the premier performing and visual arts school in the country and is a National School of Distinction by the John F. Kennedy Center for the Performing Arts.]

“When it came to acting, I wanted to learn how to do it. I didn’t want to just act,” said the native Chicagoan. “While at the Academy, I was surrounded by culturally diverse, talented and crazy good visual artists, musicians and vocalists.”

During her time at the Academy, she also was exposed to Chicago’s thriving theatre scene, such as the infamous Steppenwolf Theatre, which exposed Vogel to the likes of Joan Allen, Gary Sinise, John Malkovich, Laurie Metcalf and Glenne Headly. After high school, she auditioned for entry into Boston University School of Theatre’s training program where she earned a Bachelor’s of Fine Arts in 1987. She doesn’t remember the pieces she performed, but she remembers being asked to speak a song. Vogel chose in the moment, Simon & Garfunkel’s “Bridge Over Troubled Water.” “It was a good trick by my auditors,” she said fondly. “My voice was instantly very honest and very moving.”

Before eventually heading to the University of South Carolina for graduate school, Vogel worked one full season with American Players Theater in Spring Green, Wisconsin and interned at Milwaukee Repertory Theatre. After earning an MFA in 2003, she worked in regional theatre Shakespeare Festivals in New Jersey, Utah and Pennsylvania.

Shortly thereafter, Vogel returned to her hometown in 2005. Three years later, she was invited to play the lead in the Houston premiere of Margaret Edson’s play, “Wit” at the Texas Repertory Theatre.

“I was hesitant to play a 50-year-old lead since I was 43 at the time, but it was an amazing opportunity,” emphasized Vogel.

She continued auditioning in the Lone Star state while earning a significant amount of frequent flyer miles. Eventually, she made Houston her new home in 2010 and earned a living doing shows and teaching Introduction to Theater at San Jacinto College South. A year later, she joined Sam Houston State University where she describes her seven years there as earning “good teaching cred.”

“I really love Houston,” she said. “The theater community is small and very vibrant.”

In the fall of 2018, Vogel joined UHD as a theatre faculty member and teaches Acting Principles & Practice and 1301 Introduction to Theater.

“I immediately loved the student body,” she said. “We are able to create a well-rounded teaching program that is passionate about the art form of theatre. I’m thrilled to teach actors who have never acted or those who have some interest and experience.”She first performed in the UHD production of “Almost Maine.”

“Today’s students are so interesting, charismatic and authentic, they can’t fake it. They’re their own truthful selves, much more attuned and willing to put themselves out there in a YouTube world.”

Now, she’s reprising the role that brought her to Houston 10 years ago along with just one caveat. Not only will Vogel star in “Wit” she’s also the producer.

“Wit” is one of five plays in this inaugural year of The Houston Equity Festival. These plays are selected and produced by local members of the union Actor’s Equity Association, of which Vogel is a member. Every artist presenting a project is working and producing under the Equity Members Project Code which entails abiding by certain union rules, but also completely funding and producing the project from start to finish.

“There’s always a place for new voices in Houston,” said Vogel. This festival is a collective for these voices.”

The 90-minute play, with no intermission, features Dr. Vivian Baring, a professor of poetry who has been diagnosed with Stage 4 cancer. This 1999 Pulitzer Prize winning play is a conversation and argument with the audience.

“The play is the wonder of theater… argument and audio,” she said. “Wit is a beautifully written play that invites the audience the pleasure of listening to someone talk through their challenge while having an argument with herself and the audience. The main character is working something out in words … in language. I want the audience to experience the great humanity that we share. “Live performance is always about the shared humanity that is translated when we listen to one another. As an actor, you know why you’re in this … it’s the words that the playwrights give you to connect to the audience.

“This play is also about awareness and education, speaking out and waking up. During the original time of this play there have been so many losses to this disease.”

The September performances celebrate the 20th anniversary of the play; however, it’s not a look back at the original. The play will be set in today’s time and feature a diverse cast including UHD students.

“Acting is illusive. It’s a craft … its one real moment of time followed by the next real moment. You can’t get ahead of the moment. You’re trying to be in a place as if it’s just occurring to you the very first time.”