Exhibition to Run Through Dec. 9 at UHD 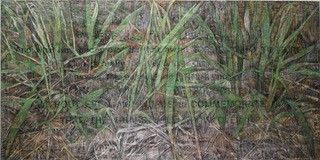 The artwork of Lydia Bodnar-Balahutrak clearly accentuates her Ukrainian roots. Nature, humanity, the political and sometimes the surreal are firmly entrenched within her paintings. Likewise, her work directly addresses the socio-political turbulence that greatly affected her parents’ homeland, as well as topics looming over the world at large such as COVID-19 .

She now brings a collection of these mixed media paintings to the University of Houston-Downtown's O’Kane Gallery for her latest exhibition “The Ties That Bind,” which will run through Dec. 9.

“This exhibition offers a beautiful blend of skillful renderings overlayed with historical imagery and content,” said Mark Cervenka, Director of the O’Kane Gallery and Professor of Art. “Quite a few very large works should give an atmosphere of nature, and in some cases, reclaiming lands and even beginning to obliterate historical and political actions.”

Works include large, sometimes wall-size paintings that will transform areas of the Gallery into wooded landscapes, which blend seamlessly with collages composed of multimedia pieces (photos, newspaper clippings). Others spotlight the beauty...and sometimes desolation...of forests and how even the most sparse elements of nature can overpower the manmade forces that suppress society.

“My work begins with collecting newspaper and magazine articles, treasured mementos, and bits of cultural artifacts that address specific themes I wish to explore in more depth,” Bodnar-Balahutrak says in her artist statement. “I center my work around meaningful historic and current events.”

The exhibition includes the charcoal work Thorns and Falling Idols displaying thorny branches enveloping two shadowy hapless figures against a collage of articles reporting on the turmoil in her ancestral country. Its intricacy reflects the artist’s meticulous attention to detail and a penchant for interweaving the natural (sometimes in its most barren state) with the political.

Continuing this trope is Will the Grass Grover Over It, a large mixed-media work depicting long blades of grass emerging over words from journalist Vasily Grossman. Despite the weeds attempting to cover his text, Grossman’s words firmly recount the tragic Holodomor and serve as a reminder of the genocidal famine that killed millions of Ukrainians from 1932 to 1933.

The exhibition also will premiere Choker, a large painting dominated by a golden image of a Skythian neck ornament. Necklaces were worn to ward off evil in the Ukraine; and this ornate work fuses a sense of tradition with radical change. Subtle images of Russian leader Vladimir Putin and Ukrainian riots emerge from beneath the golden neckpiece.

“There is an element of responsibility and respect for social structures that is probably timeless and relevant in any generation,” Cervenka said. “One of her more recent pieces is a meditation on the pandemic and varying responses to it.”

Bodnar-Balahutrak's parents arrived in the U.S. from the Ukraine at the conclusion of World War II. Born in Cleveland, Ohio, she honed her creative talents at Kent State University (earning a bachelor’s degree) and George Washington University (where she received her Master of Fine Arts). Now based in Houston, Bodnar-Balahutrak teaches at the Glassell School of Arts, Museum of Fine Arts, Houston. Upcoming projects include a commissioned work to be displayed at Hobby Airport. 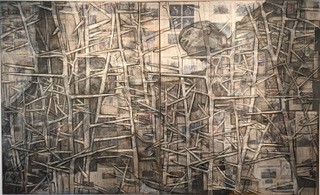 Her work has shown at galleries throughout the state and across the nation. “The Ties that Bind” marks her first solo exhibition in UHD’s O’Kane Gallery.

“The titles of my art give clues to the work,” Bodnar-Balahutrak adds in her artist statement. “I probe individual identity and cultural ties, piece together fragments of text and figuration, and perpetuate a discourse about one’s place in the world.”

The O’Kane Gallery is located on the third floor of the University’s Girard Street Building. Gallery hours are 10 a.m. – 5 p.m., Monday – Friday and noon – 5 p.m., Saturday. For details on parking and directions, visit the O’Kane Gallery website.