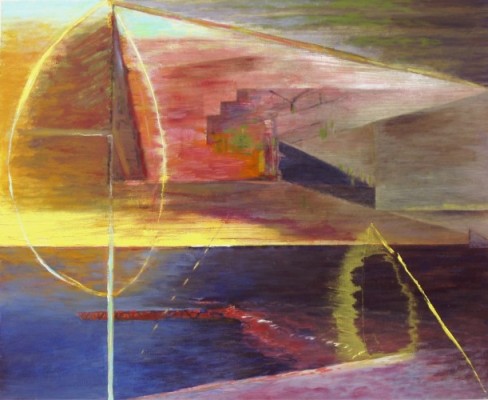 The art of Richard Stout shines bright in his native Lone Star State and around the globe. The Beaumont-raised artist’s paintings weave geometrical lines with rich colors and abstract imagery – creating intersections between nature and a broader more philosophical reflection of human experience. As a sculptor, Stout often positions bronze-cast environmental elements in surreal settings.

The results are striking as evidenced by the traveling exhibition “Sense of Home: The Art of Richard Stout.” The next—and final—stop for this acclaimed collection of works is the University of Houston-Downtown’s (UHD) O’Kane Gallery.

“Sense of Home: The Art of Richard Stout” opens Oct. 11 with a reception at 6 p.m. The exhibition will remain on view through Dec. 6.

“This exhibition showcases one of Texas's most significant artists to emerge from the last century and includes paintings and sculptures dating back to the mid-1950s,” said Mark Cervenka, director of the O’Kane Gallery.

The exhibition includes 1959’s “I Went Down to the Sea,” an acrylic painting with muted colors and a sloped landscape that resembles jetty rocks emerging from a waterway.

The exhibition fast forwards to 1977 with painting “Rose City,” another acrylic work that offers a nod to the oil industry’s impact on Texas towns (including Houston). Earth tones mingle with shades of pink as a black cloud invades the canvas.

“He is part of a long line of artists working from the fourth largest city in the country,” he said. “Houston continues to be a major supporter of the arts and Stout’s continued contributions create a link from the mid-century Modernists of the 20th century in Houston to the vibrant and diverse arts in our city today.”

“Houston continues to be a major supporter of the arts and Richard Stout’s continued contributions create a link from the mid-century Modernists of the 20th century in Houston to the vibrant and diverse arts in our city today.”

Stout was born in Beaumont in 1934. At the age of 12, he became involved with the Beaumont Museum as a young artist when he began taking formal lessons in classical drawing. He attended summer courses at the Cincinnati Art Academy as a high school student while visiting family in Cincinnati. After graduating high school, Stout attended the Art Institute of Chicago, where he earned his Bachelor of Fine Arts in 1953.  Stout migrated back to his home state to earn his Master of Fine Arts at the University of Texas at Austin. Stout worked as an instructor at the Museum School of the Museum of Fine Arts, Houston (MFAH) from 1959 to 1967. He then taught art at the University of Houston until 1996. The Art League of Houston named Stout Texas Artist of the Year in 2004. He went on to receive the Lifetime Achievement Award from the Center for the Advancement and Study of Early Texas Art in 2010. Stout's art is included in Houston’s The Menil Collection, MFAH, The University of Texas at Austin, the Art Museum of South Texas in Corpus Christi, and the Art Museum of Southeast Texas in Beaumont.

UHD community members and Houstonians will have an opportunity to meet Stout on campus. The artist will deliver a talk at noon, Oct. 24 in the O’Kane Gallery.