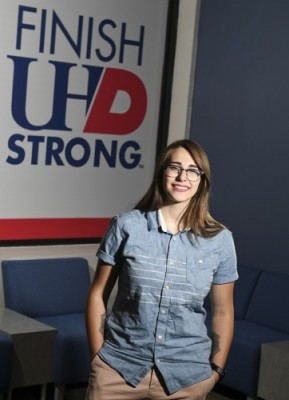 University of Houston-Downtown (UHD) junior, Jaida Doll, moved to Houston two years ago from Greenville, South Carolina via Long Island, New York. After living most of her life along the East Coast of the United States, finding her footing in Southeast Texas hasn’t been easy. However, transferring to UHD this past spring has made a huge impact on her life.

Doll earned her high school diploma at the age of 16 through homeschooling. When she arrived in Texas shortly thereafter, she immediately enrolled at Lone Star College-Tomball (LSC). The transition to being in a classroom again was a tough one, but she eventually managed to participate in LSC’s Honors courses throughout her time it took her to earn an Associate of Arts degree.

When researching Houston area universities, Doll already knew some students who enjoyed studying at UHD and also found it to be convenient and affordable. As an avid reader with a goal to become an English professor, UHD’s English Department housed in the College of Humanities & Social Sciences was attractive to her and cemented her decision to enroll.

Since arriving at UHD, Doll really wanted to immerse herself in the culture on campus and make an effort to be involved.

“I like all of the extracurricular events that go on at UHD, as well as the student newspaper and different clubs,” said Doll. “I haven’t been in Texas for very long and at first, it was really hard for me to make friends. UHD’s close-knit community have helped me form close relationships with other students.”

One of her favorite things to do is write, which is evidenced by the newspaper that she started for both her homeschool group and church back in South Carolina. She currently covers the topic of science and technology for UHD’s student-run Dateline Downtown.

“I was looking for way to get involved on campus, so this has been a great opportunity,” Doll said. “I mostly write about eco-friendly topics like what the current trends are, how UHD can be more eco-friendly and whatever new technologies are coming out. It’s really fun for me.”

In addition to expanding her writing talents, the English major also has been able to nurture her love for literature. This summer, she traveled to England and France with UHD’s Study Abroad Program on a trip focused on classic writings. The trip also included a visit to William Shakespeare's home, Stratford upon Avon.

“I was able to see some of the early editions of books that I grew up with and the places where they were inspired,” she said. “It was such a great experience, and I learned so much.”

Doll hopes to continue to take advantage of the multitude of opportunities at UHD while completing her degree in 2019. With plans to attend graduate school and possibly pursue a doctorate degree, it's clear that Houston, Texas is not her final destination.

Doll’s successful transition from LSC to UHD is an example of both institutions’ commitment to the Houston Guided Pathways to Success (Houston GPS) initiative. This multi-institutional partnership fosters collaboration among area colleges and universities with the goal of helping students graduate on time and with less debt. Additionally, Houston GPS is focused on streamlining the transfer process between local community colleges and universities.