No Obstacle Too Great for Watson's Love of the Law

Municipal Judge's Road to Success Paved by Lessons in Perseverance 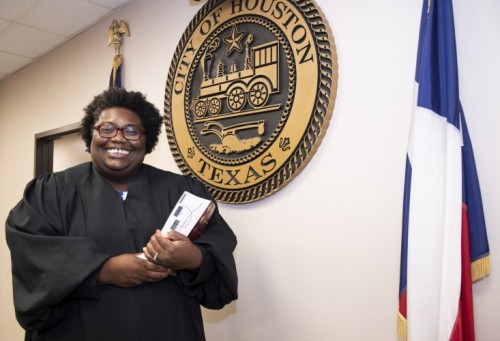 University of Houston Downtown alumna Fran Watson has long lived by Fannie Lou Hamer’s maxim “Nobody is free until everybody is free”.

The newly confirmed associate municipal judge for the City of Houston believes that all people should have equal access and has spent much of her life working towards this goal.

Watson knows firsthand how access can affect a person’s life. After suffering several family deaths in her early teens, she had to stay home and help take care of her family which resulted in her missing too many days of high school and being expelled.

She explained how those events shaped her life and outlook.

“I fell through the cracks,” she said. “When I was expelled at 16, it was a foundational door that was just shut for me. So for me, access is a value that I hold and fight for. I know that access looks different for different people. So whether it is equality for the LGBTQ community, ensuring that people have a fair process in seeking to immigrate to this country, or environmental advocacy, I will try to help. I will help develop a strategic plan or I will sharpen a pencil—whatever I can do to help us move forward.”

In 2001, Watson was working at a BBQ place and needed her GED to apply for a manager position. She came to UHD to take the GED test because it was on the bus line and she thought it would be cool to take her test at an actual college.

When Watson came back to get her scores, the woman in the testing office told her that her scores were good enough for her to qualify for a scholarship. She walked Watson over to the registration office and helped her sign up for college. A couple of months later Watson was sitting in her first classes.

Watson is a first-generation student and faced several challenges throughout her time at UHD. For the first two years, she worked two jobs in addition to attending full-time. When her grandmother died during her third year, Watson was evicted from their apartment. She slept on her best friend’s floor for the rest of that semester until she was able to get a new apartment. Watson never stopped attending classes or working during this entire time.

“Myself and other UHD faculty clocked her as brilliant from the beginning,” Anderson said. “Fran stood out to me for her brilliance but also because she was always so cheerful and funny.”

Watson credits a few professors as helping her navigate the university including Anderson and Dr. Sandra Dahlberg.

Dahlberg said she first taught Watson in her English 1302 class.

“She was a standout student, enough so that I can remember after twenty years her excitement for research and the discovery process—and digging until she found the facts,” Dahlberg said.

Watson became interested in law even before she came to UHD.

“A long time ago, I read this book about the Innocence Project - about people who had been wrongfully convicted,” she said. “Then when I got to college, I ended up taking Psychology and the Law and that sparked my interest even more. I focused mainly on social psychology and subtle prejudice. We looked at witness testimony which is what factors people see when they look at witnesses and what factors witnesses look at when they see the defendant. That was all pretty interesting.”

With her passion for justice and law, it was apparent to her professors that Watson was destined to be involved with the law. During her undergradate years, they even nicknamed her Judge Watson.

After Watson earned her bachelor’s degree, she attended Texas Southern University’s Thurgood Marshall School of Law. She appreciated the feeling of community and support that Thurgood Marshall offered. Watson said that law school helped her hone her leadership skills. She was the Associate Moot Court Coordinator for the Board of Advocates and the Executive Editor of Thurgood Marshall’s Law Review.

She credits both universities for helping with her success even though she is not a traditional student.

“I am forever grateful to UHD and TSU. I started with a GED and they gave me a chance,” she said.

Watson began her law practice in 2009 and will continue practicing during her tenure as a judge.

“As an associate judge, I keep my law practice, which focuses on protecting the legacy of families,” she said. “Most of my practice is dedicated to wills and probate, while a smaller part of my practice focuses on LGBTQ family law and consumer protection.”

One of Watson’s heroes is Barbara Jordan, the pioneering congresswoman from Houston’s Fifth Ward who notably said, “What the people want is simple. They want an America as good as its promise.” Watson was partly inspired by Jordan when she decided to run for Texas state senate in 2018.

Even though she was not elected, Watson continued to look for opportunities to serve her community.

Watson believes in the importance of giving back to the community through volunteer work. She served as president for a nonprofit that provided services for LGBTQ youth and still volunteers there. As a lawyer, Watson also gives pro bono time.

Watson became a municipal judge in July 2019 after being nominated by the presiding judge, Judge Elaine Marshall, approved by Mayor Sylvester Turner, and confirmed by the city council. Municipal judges serve a two-year term with the opportunity of seeking reappointment.

“I feel very privileged and honored to be able to serve the city in this capacity,” she said. “The municipal court system can be one of the first places that the public is interacting with the judicial system. For me it is being able to take public service and bring it to the court room. My goal is to learn from all the great judges who are here and bring that aspect of public service here.”

No Obstacle Too Great for Watson's Love of the Law