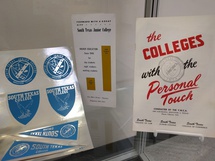 The exhibit traces UHD's history back to its earliest days. Initially, the Merchants and Manufacturers Building, which is now known as UHD's One Main Building, was home to South Texas Junior College. This was a two-year coeducational liberal arts school opened by the YMCA. The YMCA initiated the concept of night school, providing opportunities for people working full-time. Today, UHD stands as a point of pride in Houston, providing that same opportunity to working students.

"What's in a Name?" is curated by second-generation UHD alum and current library staff member Quentin Pace under the direction of University archivist Melissa Torres.

"Over the last 50 years, our University has gone through many changes," said Pace.

Among those changes is the switch in mascots as the South Texas Seahawks became the UHD Gators.

"We explore the development of the University through the evolution of marketing and branding as a profession," said Torres.

The exhibit includes vintage marketing materials from the 1960s, when newspapers were the main vehicles for advertising. In the 1970s and '80s, targeted mailers and glossy brochures were the popular way to advertise. Of course, the 'branded swag' merchandise—coffee mugs, bumper stickers, t-shirts, breath mints, and other items—followed and is still used today.

As UHD entered the 21st century, the need for a web presence was vital to marketing. On display is a sample UHD style guide for internet marketing.

"The web has dramatically increased the impact of marketing," said Toye Simmons, director of marketing at UHD. "It allows us to increase brand awareness through multiple platforms."

The exhibit, which contains multiple marketing samples from all three schools, is located in two glass cases located outside the fifth floor entrance of the library.

Funding for this exhibit was provided in part by the Houston Assembly of Delphian Chapters.