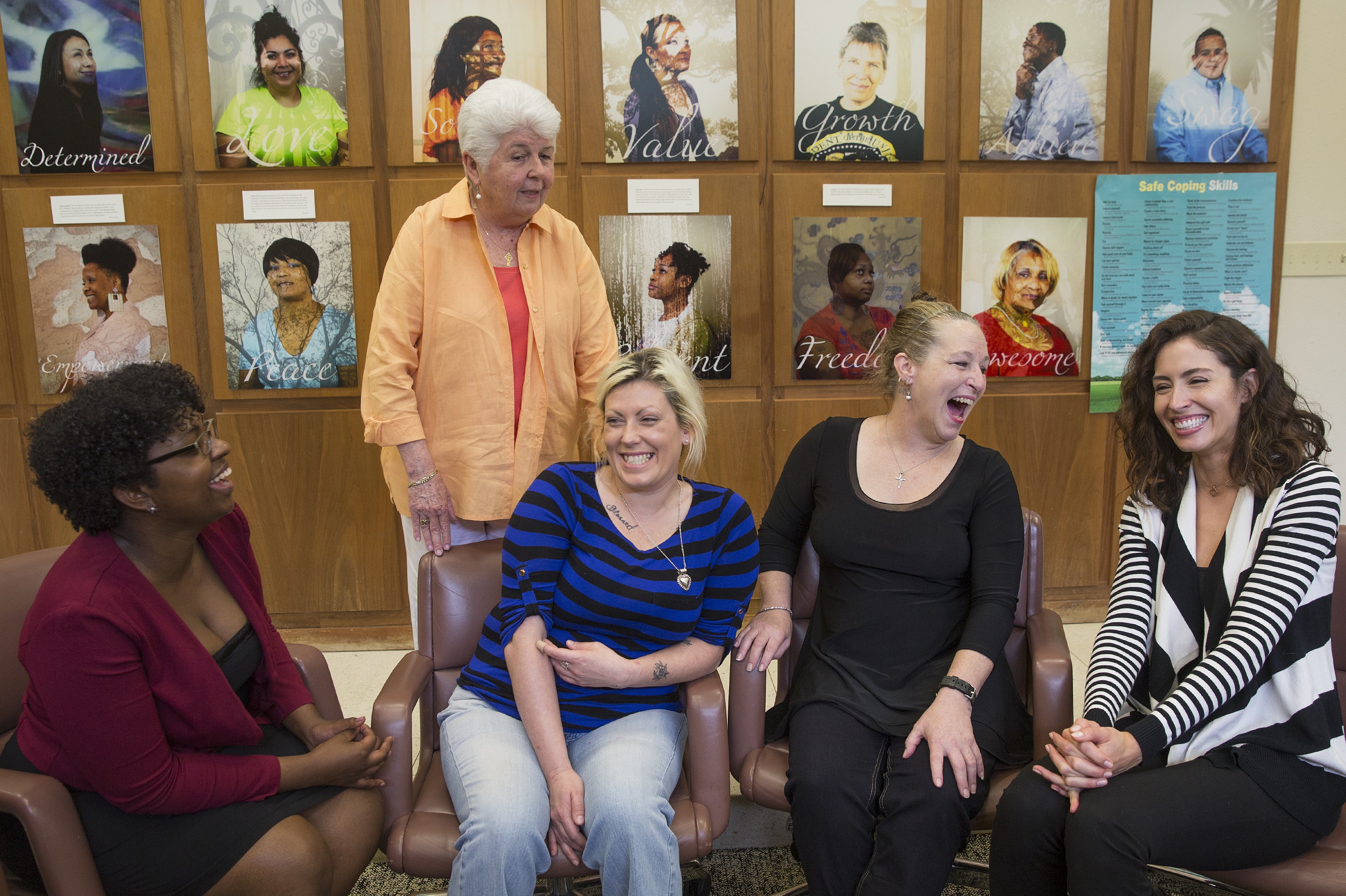 (This article is taken from the recent edition of the University of Houston-Downtown Magazine.)

A helping hand—and a friendly voice—can go a long way.

Those recovering from addiction or returning to society following incarceration benefit from guidance, discipline, instruction and compassion. It's often a long journey for individuals trying to reenter the world after years of either chemical dependence or imprisonment.

Their efforts were supported by the Center for Community Engagement and Service Learning (CCESL), as well as a Memorandum of Understanding between the University and Service Employment (SER) Jobs for Progress of the Texas Gulf Coast.

For the Senior Seminar, 10 students received state-certified peer recovery coach (PRC) training led by Amelia Murphy, director of Recovery Support Services for Houston's Santa Maria Hostel. This training was lengthy and intensive, providing students with insights on how to effectively counsel individuals with criminal backgrounds, recovering from addiction or in desperate need of direction.

Among the students who completed this training is criminal justice (CJ) major Shaun Sanchez, who has lost friends to drugs and also watched his mother lose her battle with addiction to painkillers. As a paramedic and aspiring police officer, Sanchez was motivated to participate in the PRC training to help those who may be struggling with substance abuse. Likewise, he hopes his assistance will alleviate the pain of family members who are affected by a loved one's addictions.

"People don't realize that addiction is a disease," he said. "Our job is to be there for them. As a recovery coach, it's about being there for the addict and laying the foundation to rebuild his or her future."

Sanchez and fellow CJ student Bianca Serna were among the students assigned to work at Unlimited Visions Aftercare, Inc., an adult substance abuse treatment program in Houston. Serna is confident that the PRC training will provide her with the skills and tools for a career in law enforcement.

"It provided a new understanding of how to work with individuals," Serna said. "People are different, and the training taught us to adapt to different personalities. Some of these people have been closed off for years. It's important to be a motivator, an enthusiast or someone who can get them to open up."

The students who did not undergo PRC training also contributed to local agencies and organizations aimed at helping those in need. Among those institutions benefitting from students' talents was Angela House, which transitions women back into society following incarceration. The facility offers residential facilities and programs aimed at developing goals, preparing them for jobs and life outside of prison.

Senior Ashley Rudolph and other students worked weekly at Angela House. Inspired by her grandfather, a former Houston Police Department officer, Ashley hopes to eventually join the FBI. The experience at Angela House, she said, offered perspective on those who are readjusting to life without bars.

"I've learned that going to prison actually may have saved some of these women's lives," Rudolph said. "The residents are incredibly open and offered many details on life on the inside. I think I walked away with an understanding of how one bad decision led to life behind bars; and I gained some empathy for these women."

Classmate Karla Shannon also spent a semester at Angela House. Shannon's father served time in prison, which sparked her interest in criminal justice and for the Senior Seminar. During her first days at the facility, she wasn't sure whether the returning citizens living there could relate to her and other students. She soon discovered that regardless of previous incarceration, they were simply women just like herself.

"We realized that we actually did have common ground," Shannon said. "They weren't unlike some of the women I know personally. Once you begin talking to them, you realize they're just like anyone else."

According to Angela House founder and executive director Sister Maureen O'Connell, between 62 and 70 percent of female former inmates return to prison within three years. The support from her organization, as well as UHD students, can help lower this number, she noted.

"It's been a good partnership," O'Connell said. "I was aware of UHD's Criminal Justice Program and was pleased to finally make a connection. The students who worked with us were a great help."

UHD's partnerships, such as those with Unlimited Visions, Angela House and Workfaith Connections (providing Houstonians in need with job seeking skills), will no doubt have a lasting impact on those needing a fresh start back into society. They also are particularly meaningful to the students, who gain both professional experience and the opportunity to serve their communities.

Just ask Karla Caballo, who was assigned to Workfaith Connections. Working with others has been one of the greatest rewards of her UHD experience, she said. Just as the University has given her the knowledge to succeed after graduation, she enjoys giving back to others. That, she said, has been one of her biggest takeaways from both the Senior Seminar and her UHD experience.

"I knew it would be a great experience to participate in the class," Caballo said. "It's a blessing to help others. Knowing that you can provide an answer or help someone move to a new chapter in his or her life is very rewarding and has been a very meaningful part of my time at UHD."