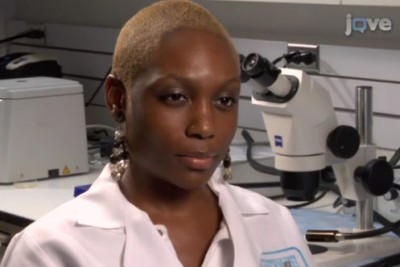 A'Tondra Gilstrap always knew she wanted to graduate from college and become a doctor, but for her, like many students, life got in the way.

A smart, over-achieving young woman, Gilstrap graduated from high school at the age of 16 and was recruited to attend a large Texas university. Soon, feelings of anonymity in a large student body and growing concern for an ailing mother forced Gilstrap to leave school and forgo her dreams. She began a career in sales, which was successful due to her hard work and with her natural talent, but not fulfilling. After several years, she knew she wanted to finish her education and jump-start her medical ambitions. Gilstrap enrolled at UHD and was accepted into the Scholars Academy to pursue her passion for chemistry.

Her academic career soon skyrocketed. She received the UHD Minority Access to Research Careers (MARC) grant, funded by the National Institute of General Medical Sciences, and landed an internship with the University of Texas School of Public Health.

"After beginning my internship, everything took off for me," Gilstrap said. "I met so many scientists and industry professionals, attended conferences and had experiences that would have been impossible anywhere other than UHD."

Gilstrap and two colleagues were recently published in the Journal of Visualized Experiments (JoVE). The name of their research project is "Local and Global Methods of Assessing Thermal Nociception in Drosophila Larvae." To read the abstract or watch an information video on the project, click here.

After graduating from UHD in 2013, Gilstrap plans to earn a dual MD/PhD, which will allow her to practice as a physician, as well as conduct research. In addition to her academic achievements, Gilstrap is a mother to four boys under the age of 10 and she is already encouraging them to work toward setting their educational goals. According to Gilstrap, "It's never too early to have a plan."