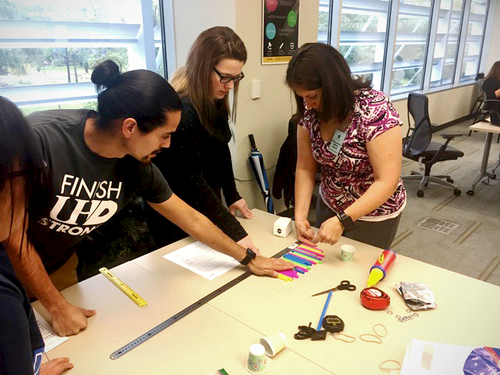 On Dec. 7, several teacher candidates from the University of Houston-Downtown (UHD) Department of Urban Education were special guests at NASA's Johnson Space Center. They participated in a live news conference with astronauts Andrew Feustal and Richard Arnold, and cosmonaut Oleg Artemtyev.

Ten students along with Dr. Franklin Allaire, UHD assistant professor of science education, were invited by Arnold, a science teacher turned astronaut, and NASA's Office of Education to participate in the conference as part of its Year of Education on Station program.

Students' participation in the news conference was part of an ongoing UHD-NASA partnership to engage teacher candidates in science methods courses to conduct lessons aligned with NASA's STEM on Station curriculum. Recently, the students designed experiments to be conducted by Astronaut Joseph Acaba, a former math and science teacher who is currently aboard the International Space Station (ISS). On Feb. 13, 2018, the Department of Urban Education will host a live educational downlink between UHD and Astronaut Acaba, in which teacher candidates in will be able to talk directly to the astronaut aboard the ISS.

"We're honored to work with the UHD students for our Year of Education on Station," remarked Matthew Wallace, NASA Education Specialist. "This year, educator astronauts are bringing the unique microgravity environment to the classroom for a full school year. We hope this experience help teacher candidates to inspire the next generation of explorers when they have students of their own."

In addition to the news conference, UHD students received a behind-the-scenes tour of NASA's Space Vehicle Mock-up Facility where Feustal, Artemtyev, and Arnold trained for Expedition 55-56 aboard the ISS.

Students also toured the ISS Mission Control Center and participated in hands-on STEM on Station activities with Becky Kamas, STEM on Station Activity Manager, and NASA Educational Specialists Matthew Wallace and Scott Black. The Expedition 55-56 News Conference was an opportunity for UHD students, as well as representatives of news outlets and other organizations connected with the astronauts, to ask Feustal, Artemtyev, and Arnold questions in the lead up to their launch in March. UHD undergraduate teacher candidates Deena Ayash and Leo Lopez and graduate student Melissa Kreipe, who is also a science teacher at Null Middle School, were able to ask the crew several questions during the conference.

One question focused on advice for future astronauts.

Arnold: "Study math and science. It's a physically demanding job. It's a mentally demanding job and it requires you to be able to fix and repair things. You cannot be a one-dimensional person. I think most of the folks that fly in space…they exhibit a tenacity, they exhibit a willingness to take constructive criticism and try to improve. Then they definitely have a sense of humor to laugh at the first two things. But really…being well rounded and good at what you do. It's required to have a background in science, math, and engineering to get that foot in the door."

Kreipe asked Arnold about what made him take a career detour from teaching into becoming an astronaut.

Arnold: "I was always interested in space exploration and ocean exploration when I was a kid. I think my desire to learn is what ultimately what drove me into a job in teaching. To be able to work alongside students and learn together. I never had one school year that was like the previous one because there was always something new that you could be doing. While teaching I was able to pursue those interests in space science, in oceanography and marine science, along with my students. And the more interested I got in the history of space exploration and the technology behind it and the things we were doing I kind of thought 'that's something I wouldn't mind looking in to.' Certainly (astronaut and teacher) Christa McAuliffe on the Challenger Mission and Barb Morgan who followed in her footsteps gave me an idea that there might be an opportunity to come and join this program. And when the time came and I saw the advertisement that NASA was looking to recruit astronauts I thought 'well, I kind of owe it to myself to at least try. It would be a really, really awesome rejection letter to have framed in my office to say that I threw my name in.' I was lucky and fortunate enough to end up here and to be a part of this team.

Student Leo Lopez asked astronaut Arnold about his his philosophy of teaching.

Arnold: "I think a lot of what we learn we learn by doing and I think if you can inspire children to follow the things that they're interested in…to help them find out what they're interested in, what their passions are, and encourage the critical thinking that's required for students to be successful…that to me is the foundation of education. Critical thinking and analysis and problem solving are the key skills that we need to be a functioning society and for students to be functional members of society. I think our instruction should be geared towards that. We need kids to be able to look at the world, take data in, process it, and make informed decisions about what's actually going on around them."