Last week’s edition of UHD News shared the news of the inauguration of the newly elected Student Government Association (SGA) officers and their orientation during a very busy first week of 2023 and provided insight into the backgrounds and visions for the future of President Jesus Nieto and Vice President Camila Pardomo.

Gators, now is the time to get to know the other officers and senators of YOUR SGA!

Treasurer Ali Musa was born in Kuwait of Palestinian descent and migrated to Houston when he was five, growing up in the Greenspoint area. Currently in his junior year, Ali enjoys the natural hospitality ingrained in the UHD culture because it makes it easier to get to know other students, staff, and faculty. A Political Science major, Ali’s passion is to solve 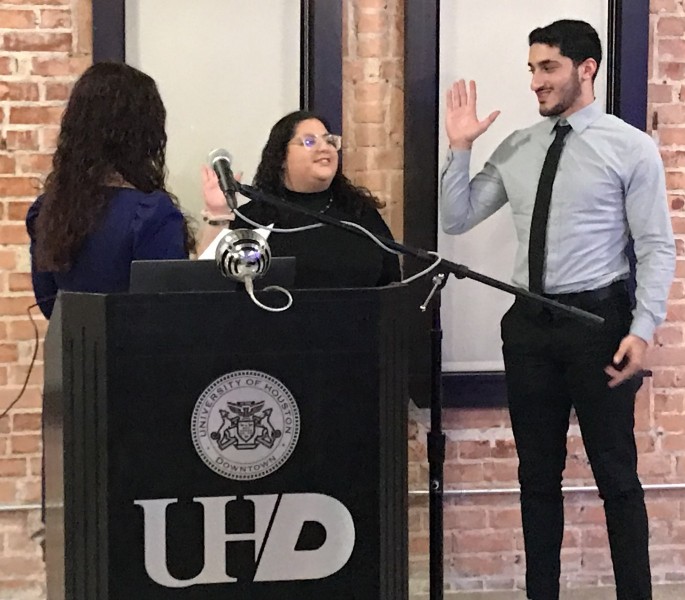 conflicts - so it is no wonder that his career goal is to become an arbitrator.

A native Houstonian, Secretary Veronica Costilla loves the diversity of Houston and how UHD reflects that diversity. She credits her Aunt Jeanette as her biggest supporter who has encouraged her to be politically involved to make changes in her community. A junior, Veronica is studying Political Science with a focus on international relations. She plans to study international law in law school with the ultimate goal of being a part of the United Nations’ many committees.

College of Public Service Senator Pooja Dhiman shared “Working with exploited women and children has inspired me to attend law school because I can see how unfair the system is.” She tells students to take advantage of studying abroad because it is so educational. “I’ve had the opportunity to study abroad, which was perhaps one of my best experiences.”

A Radiohead fan and electric guitarist, College of Sciences & Technology Senator Elise de Leon currently works for a biotech company. She built her own computer at the age of 10 after winning a competition at Comicon. “This sparked my love for building and creating, and I have continued to cultivate these skills throughout my education and career.” Elise adds, “As a Hispanic woman in the field of STEM, I am driven to set an example for other Latinas and minorities who my feel underrepresented in this field. My goal is to become a software engineer with a focus on artificial intelligence.”

College of Humanities and Social Sciences Senator Ruben Salazar was born and raised in East Aldine where his family has lived for more than four generations. Like his great grandmother who was a community advocate from the early 1950’s until her death in 1991, Ruben has worked to make community improvements, especially as president of his local civic association board. He is pursuing his degree in Political Science and hopes to serve his constituents as an elected official at the local, state, or federal level someday.

A sense of community is Marlene Martinez’s favorite thing about UHD. Marlene serves as the Marilyn Davies College of Business Senator. She stated, “UHD has provided me the ability to continue my education while also juggling work and family.” One of Marlene’s career goals is to become an attorney and open her own law firm.

Learn more about SGA and get involved!