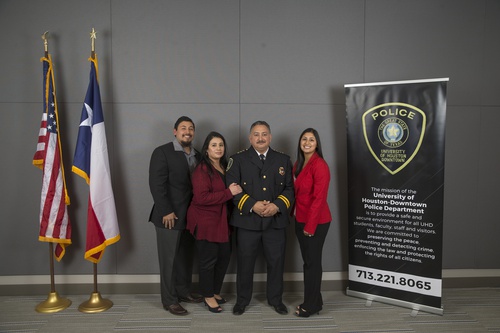 On a darkened campus, members of the University of Houston-Downtown Police Department (UHDPD) conducted an impromptu swearing-in ceremony for its newest assistant chief. With no power on campus, officers held flashlights as David DeLeon took the Oath of Honor. That's not the usual protocol when an officer is promoted, but that was the case when DeLeon took his new position during the days following Harvey.

"Chief Benford told me that it needed to be official, so I rose my right hand and took the oath," DeLeon said. "We grabbed some officers to be witnesses, and David Bradley (vice president for Administration and Finance) was here. It was definitely memorable."

DeLeon began his career at UHD 25 years ago. Prior to serving the University, he was working at a paint company, but it went bankrupt. He then enrolled at the University's Criminal Justice Training Center as a cadet. Immediately after graduating, he spotted an opening with the UHDPD. He applied and was hired.

He rose through the ranks, becoming a lieutenant and overseeing the department's investigations unit. According to DeLeon, the investigative process appeals to him because it engages his critical thinking abilities and allows him to explore different aspects of policing.

"Sometimes, everything isn't as it seems," DeLeon said. "Once you start looking into a situation, you might see that there's more than meets the eye … or what someone tells you might not be entirely true."

DeLeon's skills as an investigator have certainly grown, but he credits UHDPD for helping him and others become well-rounded officers.

"Being in a smaller department, you have your hands on a lot of things," he said. "Investigations, booking, interviews. Here, you have many opportunities as an officer. It's a good department with many good officers."

While DeLeon has many great memories of his time at UHDPD, there was a brief moment when he literally couldn't remember anything. While leaving campus on his motorcycle one day, he was in an accident. He can barely recall what exactly happened. A few days after the incident, he awoke at home with no recollection of what transpired.

"I didn't remember being at the hospital or coming home," DeLeon said. "I just woke up one day at my house and wasn't sure how I got there. I was apparently conscious and talking to people in the days after the accident … but I didn't remember any of it. All I could think of what whether my bike was okay, and it was."

If anything positive came out of that accident, it was that DeLeon dropped a longtime habit.

"I quit smoking," he said. "After that happened, I didn't have the desire to smoke any more. I just stopped and never missed it."

In 2016, DeLeon was named interim chief following the retirement of Richard Boyle, who led the department for 16 years. His experience as interim chief prepared him for his latest role, but he also credits the support of his fellow officers and staff members for developing his leadership skills.

"I couldn't do it without my fellow officers," DeLeon said. "I am grateful to work with them."

Before being named assistant chief, DeLeon earned the Chaney Anderson Distinguished Excellence Award during the 2017 Staff Excellence Awards. The honor, he said, is particularly meaningful as he is passionate about his work at UHD.

Although DeLeon was officially sworn in on a damp, dark day during Harvey, he received the opportunity to share his honor with friends, family and the campus community in the Milam/Travis Rooms. On Dec. 15, he was among several officers receiving promotions in rank. DeLeon's wife, Sylvia, and children David Jr. and Alexis were in attendance.

His experience as an officer no doubt bolsters his abilities as assistant chief, but he feels that he has more to learn. He also encourages other officers to do the same.

"It's important to grow as officers," DeLeon said. "I always tell younger officers to talk to the veterans in the department, watch what they do, and try to gain more knowledge about policing. Each day, all of us have a chance to improve as police officers, so it's important to take advantage of any learning opportunities that come our way."