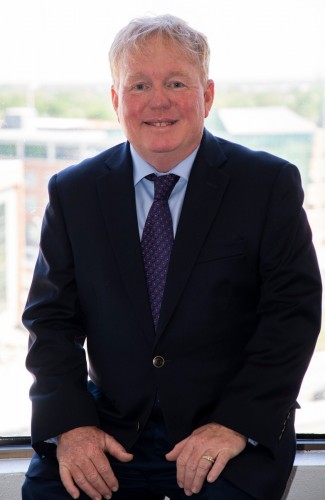 Once he was asked if he was the first in his family to get a college degree.

He replied, “I’m the first in my family to have a high school diploma.”

“My dad, who swung a hammer his whole life as a carpenter, never matriculated past third grade,” said UHD professor Dr. David Branham. “And, my mom dropped out of high school in 10th grade at the age of 16. We grew up with modest means, but we always had enough.”

At age 11, Branham along with his mother, father and younger brother arrived in the Lone Star State by way of Southern California’s Cherry Valley (just 30 miles outside of Palm Springs). He attended Houston’s MacArthur High School.

A Political Scientist in the Making

In his mid-20s, he attended North Harris College (now Lone Star College-North Harris); followed by the University of Houston (UH) for a double major in political science and psychology.

Not long after turning 40, Branham earned a Ph.D. in political science from UH. After a brief stint at Texas A&M University-Corpus Christi, he worked at UH’s Center for Public Policy for five years before joining UHD.

Now 14 years later, his love for the University hasn’t waned.

“What I love about UHD is that if you have an idea, they’ll let you run with the ball,” he said.

One such idea initiated by a former faculty member came to fruition when placed in Branham’s hands—the directorship of UHD’s nonprofit management degree program. He attributes the success of this online program to working with the city’s best nonprofit CEOs—Brian Greene of the Houston Food Bank—the largest and most successful nonprofit in the nation; and Dr. Robert Sanborn of Children At Risk. Both teach UHD courses, Greene in management and Sanborn in leadership and fundraising, respectively.

“Students are taught by CEOs of very successful nonprofits,” Branham said. “We have real legitimacy from the nonprofit world. It’s not purely an academic program. The program deserves to be ranked. I think it should be ranked even higher.”

The first cohort of students were in the fall of 2013 and within two years the program was ranked fifth in the country.

“Up to this point, this program has been the best thing in my career,” he said. “The people I’ve had the opportunity to work with have been fantastic and the result has been a very successful program.”

Love for The Game

He started playing golf at the age of 8.

“I always loved golf. I would ride my bicycle with my clubs along with my brother and cousin to the El Dorado Country Club every day,” he smiled reminiscing. “From age 13 to 38 (through graduate school), I did every job there was at the club—from golf carts to driving range to assistant pro to cook to bartender. We were a close family.”

Branham still keeps in touch with his Eldorado family through its own Facebook community. At the age of 18, he won Eldorado’s Club Championship. In fact, he always wanted to be pro golfer. Even though he says, he wasn’t good enough to be a pro.

“It was a diversion that I knew that I could no longer hold on to, which eventually opened my focus to be a professor,” he said.

But his love for golf and teaching came together at First Tee of Greater Houston (FTGH), where Branham has volunteered as a golf coach and occasional STEM tutor for the past six years. FTGH is also where he met MacArthur High School student Curtis Hainsworth. His twin children, which he says are “really good golfers,” also participate in the program.

In 2018, the UHD Golf Club sports team arrived on campus with Hainsworth at the helm as team captain and Branham as coach. The four-member team’s first tourney was in Waco last fall. Branham hopes that the now all-men team will also include women in the near future.

His credentials are undeniable and his television and radio appearances exceed more than 100 in three years … 81 in the past two years alone.

Even though he has made three national appearances on Fox News that wasn’t a career highlight. For Branham, it was statewide coverage of the George H.W. Bush funeral on public radio’s “Houston Matters.”

“If I never do another media coverage in my life, I can hang my hat on this one,” he said.

In January 2018, he made his first appearance as a political analyst on “The Isiah Factor.” So far, 21 times and counting.

Why does he do it?

“I’m a political scientist … no one cares about my personal political opinion,” Branham said. “I’m more concerned about giving a perspective that gives the reality of the situation. What I really want to put out there is an intelligent analysis of what I really think will happen.”

As for those ideologues who do make it their business to convince others … Branham offers some advice: “You don’t change someone’s opinion by yelling and screaming.”