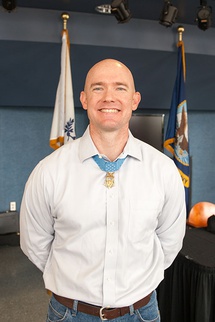 He served in both the Marine Corps and the Army, but it was his courage under fire during a firefight with more than 300 anti-Afghan forces on October 3, 2009, that earned him the Medal of Honor. More information about Staff Sgt. Carter and the heroism he showed on the battlefield is available on the Army's website.

Carter joined student veterans in the UHD Welcome Center for lunch, then offered some words of encouragement before participating in a question and answer session. Carter is a staunch mental health advocate, encouraging other veterans who may suffer from PTSD to get help.

When asked if he hoped to inspire veterans to seek assistance, Staff Sgt. Carter said, "I don't do this to inspire. In my mind, I'm repaying a debt to the eight guys that died on the battlefield that day. If just one vet gets help, I've made a difference."

"More than 400 veterans attend UHD, and we're proud to be able to offer them this once-in-a-lifetime opportunity," said Richard Selvera, director of UHD Veterans Services. The event kicked off the UHD May, Mental Health Awareness Month events.