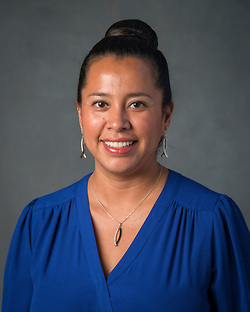 Mayra Hernandez has gathered many takeaways during a long career that has spanned teaching, instructional coaching and educational administration.One in particular, however, has a powerful lasting effect–relentless progression.

After earning a degree in Interdisciplinary Studies from the University of Houston-Downtown (UHD), Hernandez ('00) chose to commit her life to students in the Houston Independent School District (HISD).

In 2001, she began her teaching career as a fourth-grade bilingual teacher at Sherman Oaks Elementary School. And, because of her enduring commitment and enormous efforts, she earned the special honor of Bilingual Teacher of the Year 2004.

Having a knack for leading educators, she then decided to transition from the classroom to a position in education administration—coaching and mentoring other Sherman Oaks teachers, and providing them with insights on professional development.

"Teaching is a rewarding profession, and it's not normally an easy decision to step away from the classroom to take an administrative role," said Hernandez. "I actually had no intentions of moving into administration until my principal convinced me to become an instructional coach. She believed it would make more of an impact on the whole school environment by working with staff to improve instruction and classroom management."

While spreading her passion to other educators, Hernandez decided it was time to take her career in education to the next level. In 2009, she earned a master's degree in Educational Administration from Sam Houston State University to pursue a principal role. Two years later, Hernandez accepted an assistant principal position at Davila Elementary School.

Destined to lead, she became principal just after one year. Under her administration, Davila transitioned from an "Improvement Required School" (IR) to a "Met Standard School," ratings used under the Texas Accountability Intervention System.

"It took us about two years to close achievement gaps and subsequently make it out of IR," said Hernandez. "It was a lot of work, but reading was the foundation. We encouraged reading in every single subject and explored resources to engage students and pique their interest. Instilling the love of reading in them was definitely a priority, and we were able to meet standard because of that."

Hernandez also said parent involvement was also a key component in getting out of IR status. "We were transparent with parents with our data, where we were academically, and what we needed to work on to improve."

Hernandez has a demonstrated track record in leading teams to accomplish long-term goals. Now the principal of Edison Middle School, she's faced with a similar challenge— getting Edison out of IR status.

And the UHD alum is up for the challenge and is genuinely committed to student success and the overall success of Edison Middle School.

"I'm here for the long haul," she said. "School climate, student relationships and becoming a data-driven culture are two main components that will get us out of IR status."

So what keeps Hernandez inspired? Her answer is simple.

"What keeps me going are the students," she said. "Because I share the same life experience as my economically disadvantaged students, I'm able to relate and see the possibilities of what they can become. Never in my life, had I thought I could me a principal, but here I am. I constantly tell my students, I got this but you can have this too."

Her foundation of success: UHD.

Hernandez credits UHD for preparing her for a successful career in education.

"UHD's teacher mentoring program provided me hands-on experience within the curriculum," she explained. "As a mentee, I was able to shadow teachers in a real-class situation—at both high- performing campuses and low-performing campuses. UHD helped me become more ready."