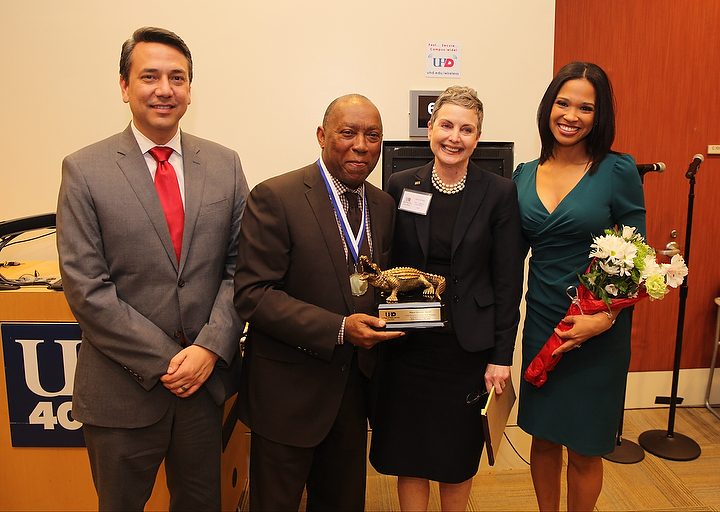 A full house greeted Houston Mayor Sylvester Turner to honor him as the University of Houston-Downtown's (UHD) Bachelor of Social Work Person of the Year on Jan. 25.

"We don't build walls in this city," he said to a round of applause. "We build relationships."

Mayor Turner is the sixth Houstonian to be recognized with Person of the Year honors. This year, the Bachelor of Social Work program also recognized Mia Gradney, KHOU anchor and Alan Detlaff, dean of the University of Houston's Graduate College of Social Work for their efforts in supporting Houstonians. The awards ceremony took place in UHD's Commerce Street Building's C-100.

A native Houstonian, Mayor Turner reflected on the many challenges faced by Houstonians and his commitment to helping them.

"When I campaigned, there were a lot of conversations about potholes in our streets. I said we'd work on them," he said. "At the end of the year, we filled at least 40,000 potholes, but that's not what keeps me up at night. In our city…under our overpasses…on our street corners, we have people who have potholes in their lives. Those are the potholes that are the most difficult to fill."

Among the UHD dignitaries in attendance were Leigh Van Horn, interim dean of the College of Public Service; Dawn McCarty, associate professor and director of UHD's BSW program; and poet A.J. McQueen. The event was covered by KHOU Ch. 11.