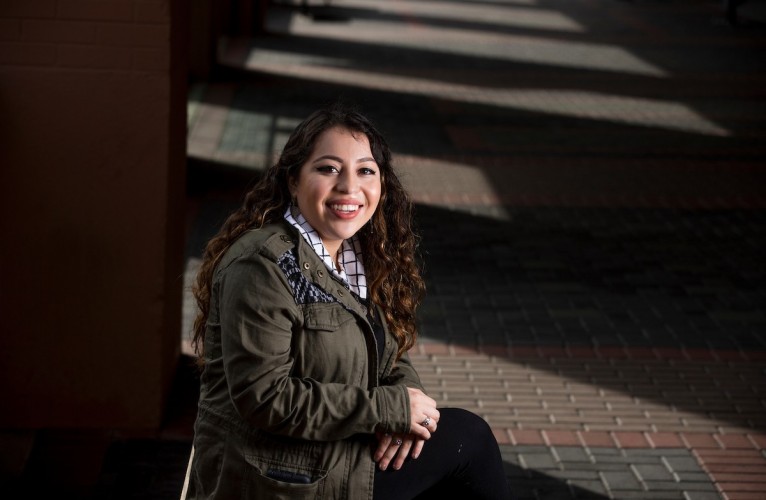 In just a few short years, Magge Nuñez, a University of Houston-Downtown (UHD) senior, has gained the respect of her peers and professors as a devoted campus leader and advocate. Nuñez's motivation is apparent in her academic studies, extracurricular pursuits and in her work as a student and community activist.

Nuñez, a Salvadoran-American, is particularly passionate about Lesbian, Gay, Bisexual, Transgender, Queer (LGBTQ) rights and equality. At UHD, she is the president of the Texas Freedom Network (TFN), a student chapter that supports religious freedom and individual liberties. Currently, she is earning a Bachelor of Science in Psychology with a minor in Spanish and taking deliberate steps toward promoting change within herself, and in the local communities.

"I love being an activist, and I take activism very seriously," said Nuñez. "Through my internship with Texas Freedom Network, I'm able to do a lot of things for the Houston community. I've participated in nonpartisan voter registration drives and various protests. I also have advocated for LGBTQ issues, women's rights and minority rights on several occasions."

Nuñez's internship experience not only exemplifies her acute awareness of gender equality and injustice, but also serves as an important checkpoint in her career path. Along with her goals to pursue a master's degree in psychology, she will participate in a leadership development program with Young People For, an organization that provides leadership skills and resources to young activists in hopes of implanting change in their community. She hopes to combine these skills with her studies to better help the Houston community.

A hardworking student in UHD's Honors Program, Nuñez, 20, holds her UHD education in high regard. As a first-generation college student, she is passionate about attending UHD and ultimately, completing her degree.

Beyond her academic pursuits, Nuñez is involved in multiple student organizations: National Society Collegiate Scholars Honors Society, Golden Key International, UHD Honors Program, and the League of United Latin American Citizens (LULAC) at UHD. She has also participated in various committee and student org activities including, #GatorsDontSayCampaign, a campaign that seeks to raise awareness of the ways in which our language choices often dehumanize, exclude, demean and marginalize others.

Nuñez is confident that her educational experience at UHD will help fulfill her career plans.

"At UHD, I've encountered a lot of people that have helped me in my academic journey," she said. "And I've been able to represent UHD in different capacities: television show segments, radio and debates. These connections will help me out in the long run."

Her connection with many professors has also been a grounding force. Nuñez said that Honors Program Director Mari Nicholson-Preuss was one of the biggest influences on her decision to apply to the UHD Honors Program. She also noted that psychology professor Kristen Anderson inspired her to be more involved in the community.

"Her classes are just so impactful," Nuñez said. "I leave the class feeling pumped, like we can do something for our community. She's also very transparent, blunt and motivating and I appreciate her efforts."

When asked about her future plans, she said she plans to "pursue a master's degree in industrial psychology or social psychology."