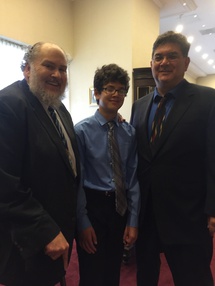 When I was growing up in Santa Fe and Albuquerque, New Mexico, I was allowed to ride the bus to the magnificent Albuquerque Public Library building downtown. While there I read from many books, including my favorite, the Bronc Burnett series by Wilfred McCormick. I could also travel to the wonderful University of New Mexico (UNM) Zimmerman Library, where I would perch beneath the striking murals and transport myself all over the world. When I misbehaved, I was not allowed the bus trips or library privileges.

Last week was my own library week, in ways that directly and indirectly involved the University of Houston­-Downtown (UHD).

On Friday, I visited with Pat Ensor, the Executive Director of the UHD Library, and her staff. We discussed library issues, particularly the evolving needs of our students and how technology is changing librarianship. I was particularly interested in how we serve our programs in northwest Houston, the various online instructional needs, and the growing MBA program needs. They have also learned from my short time here that Tres Leches will bring me calling.

On Saturday, I joined UHD political science professor John Linantud and his 12-year-old son Henryk, who is a 6th grader at Mitchell Intermediate School in the Woodlands, at the dedication of the Islamic Da'wah Center on 201 Travis Street. I can see this historic building from my office. Texas Governor Ross Sterling built the Houston National Bank building in 1928. Sterling was the founder and president of the Humble Oil and Refining Company, which eventually grew into Exxon Mobile. Former UH Cougar Hakeem Olajuwon has renovated the building and converted it into the center. He attended the ceremony and dedication of the Library, which will house important holdings and books on Islam. Olajuwon is one of so many people who came to Houston, achieved greatness, and continues to give back to the community. What better way to endow a legacy than to establish a library?

Houston Mayor Sylvester Turner was there. I also saw him later in the evening as we attended the Houston Community College (HCC) Foundation Scholarship Gala. HCC is one of our major partners and the source of many of our students.

Overall, it was a great week for UHD, for the Islamic community in Houston, and for libraries.

For more information about the Islamic Da'wah center, visit http://islamicdawahcenter.org