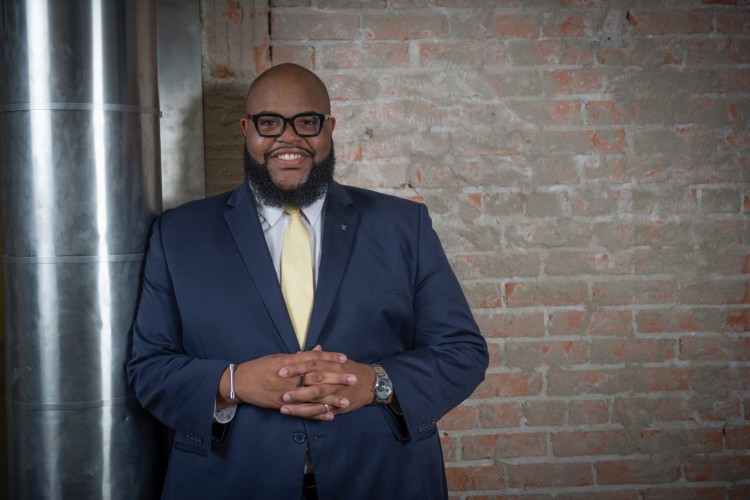 It’s funny how life works out.

For the gregarious UHD staffer this cliché rings true.

Eugene Bernard is always looking for the next big challenge.

Throughout his collegiate years at San Jacinto College, he held various positions from student-employee in IT to a student mentor to an enrollment management transcript evaluator. Bernard also worked as an auditor at a local hotel to late night shifts at Jack In The Box.

We’ll come back to Jack In The Box later.

After earning an associate’s degree San Jacinto College, he attended University of Houston-Clear Lake (UHCL) as he simultaneously continued working at SJC in Enrollment Management. In 2011, he graduated with a bachelor’s in communications followed by a master’s in digital media studies in 2016.

“I thought I was going to be a news reporter,” Bernard said laughing. “I had no idea that higher ed would be my calling.”

Before joining UHD five months ago, Bernard served as district manager for Veteran Services for all three campuses within the San Jacinto College System.

After now 15 years in higher education, Bernard credits his “wonderful mentors” at San Jacinto College for ushering him into higher ed leadership opportunities, which has prepared for a career at UHD.

“Every experience in my life has lead me to this very moment,” said the 33-year-old. “I now have a keen sense of what these students need in order to be successful.” Bernard’s next chapter and challenge at UHD was exactly what he wanted.

This year, from May to August, Bernard and his team has hosted 57 individual programs, thus making connections with more than 1,200 admitted students.

“When I first visited UHD, I witnessed the engagement of the faculty, staff and administrators, which was so amazing … I was blown away. I love the fact that everyone is so visible. That’s what drew me in. That’s why I’m here today.”What do you say to inspire students?

“The Laws of Attraction are so incredible, I want to connect people with resources to help fulfill their experiences. If I’m in a position to give…anything I can do to help others to be successful. Accept advice, use your resources that are available. I will push and poke you to lead you where you need to be.

“Everybody has something special about them. When I see that something in others, I’m willing to help them live out their dreams.”

Now, let’s go back to Jack In The Box.

His first claim to fame? His voice.

For a limited time, every customer in Texas placing an order at a Jack In The Box drive-thru heard Bernard’s voice say: “Welcome to Jack In The Box, would you like to try a ciabatta burger today?”

His fave Jack In The Box menu item? The cheesecake.

“Working at Jack (In The Box) taught me so much,” the La Porte native emphasized. “I learned that anything you do, you have to put your heart into it … a 120 percent. If I could I make it there, I knew I could make it anywhere!”

He’s applied this acumen to every single job he’s held.

Even though he didn’t want to make the fast-food chain a permanent career choice, Bernard took it seriously. During UHD orientations, he shares his Jack In The Box experiences with future Gators and their families.

He describes the whole acting thing as a “fluke.”

Always up for a challenge, but acting? No way.

She contacted him to audition for a play she was producing, but he declined multiple times.

Eventually he auditioned and got the part in the 2015 production of Johnson’s “The Gentleman” in which he played an ex-con trying to develop a relationship with his daughter.

“It was very challenging and way out of my comfort zone,” Bernard said.

While expanding his acting resume, Bernard pursued his master’s degree, raised a family with his wife, worked full-time, served as Johnson’s production assistant and acted in two more plays. 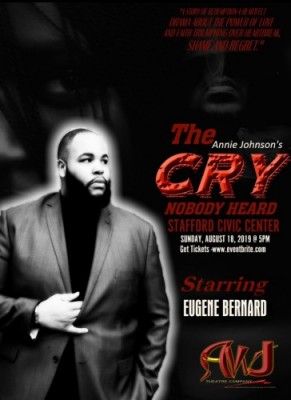 At one of Johnson’s live productions, she told the cast that movie producers would be in the audience.

After curtain call, movie producer Fredrick Alanzo approached Bernard about being in his next movie.

As fate would have it, he got the part in Alonzo’s “Keep On Lovin” slated to premier at the end of this year.

“My life has played out as a movie. I don’t have any regrets. There is nothing that I wished I would have done,” he said. “Every day is a runway…the world is always watching.”

Bernard is set to perform in Johnson’s fourth production this year, “The Cry Nobody Heard” which will premiere at 5 p.m. on Sunday, Aug. 18 at the Stafford Centre Performing Arts Theatre. Tickets are available at www.eventbrite.com.