Lecturer Provides UHD a Special Connection to the Super Bowl

In addition to teaching courses in political science and being the pre-law faculty advisor at UHD, Colon is also a practicing attorney and the chairman of the board for the Harris County Sports and Convention Corporation, the not-for-profit company that operates and maintains the public facilities at Reliant Park, including Reliant Stadium and the Astrodome.

The HCSCC and Colon have been busy this summer, receiving and vetting private proposals for the renovation and reuse of Houston's landmark Astrodome. Colon also served on the committee that proposed and won the bid for Super Bowl 2017 to return to Houston.

When asked how he manages all of his professional responsibilities, Colon said, "I love all three of my jobs and enjoy every second of each one. It's all a matter of balancing and structuring life to make everything work smoothly."

Colon described the process of bidding for the Super Bowl as a large undertaking that "required a large team of people to put together." With a long list of guidelines laid out by the National Football League (NFL), the committee had to ensure every detail of their proposal was attractive and accurate.

"We had to calculate how much money the NFL would make from the game, secure the premises (Reliant Stadium) and enough hotel rooms for the teams and fans," he said. "We even had the City of Houston dedicate a runway at Ellington Field for team owners, which they really liked."

Colon has also been on the host committees that bid for the Olympics and World Cup.

At UHD, Colon often brings his life experiences into the classroom, saying it makes him a better teacher.

"I can integrate my experiences into my classes and I'm able to bring real world examples to my students and make it more interesting for them. With all of the work we've been doing over the summer (with HCSCC) - I'll have a lot to share with my students in the fall!" 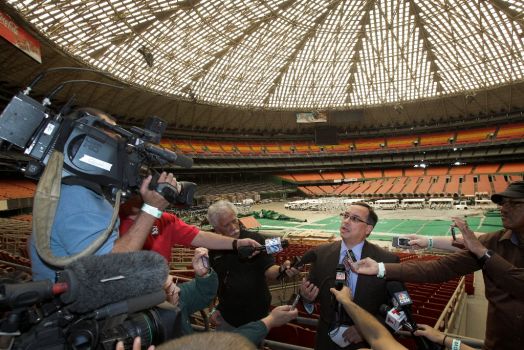 Lecturer Provides UHD a Special Connection to the Super Bowl