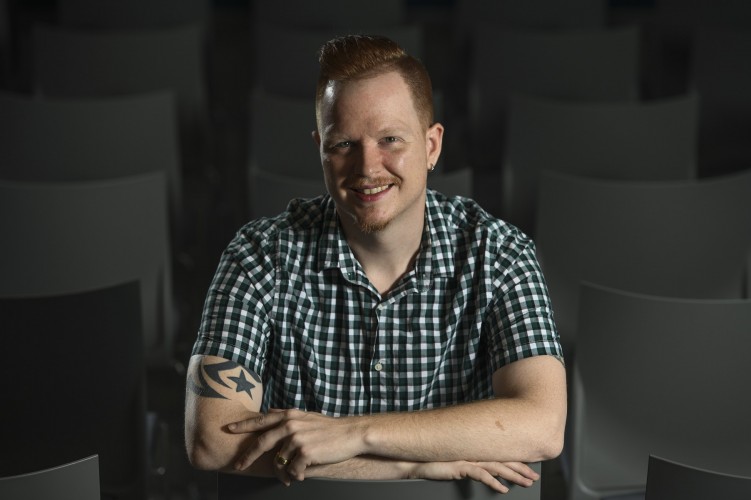 Life is a journey. Marilyn Davies College of Business junior, Justin Tyler, is glad his journey led him to the University of Downtown-Houston (UHD). As an early graduate of Channelview High School, Tyler began his undergraduate career at The University of St. Thomas. As the story goes, he found himself juggling three jobs and classes, until he finally decided to focus solely on working.

During this time working at different companies, including as a corporate merchandising manager for Academy Sports and Outdoors, Tyler developed a passion for business and specifically Human Resources.

"A lot of the companies I have worked for have had challenges in the Human Resources department," Tyler said. "Managing employees, I felt a disconnect between corporate and employee goals, which led me to want to bridge that gap. The business side of a company is important, but the people are the most important."

It was only after 10 years in the workforce that Tyler, with encouragement from his husband, decided to pick the books back up, re-enter college, and work toward a Bachelor of Business Administration in Human Resources. He first attended Houston Community College (HCC), where he obtained an Associate of Arts in Business. With a vision in mind at HCC, he mapped out all of his classes according to the transfer plan he was given in his first advising session. Armed with a 4.0 GPA and the required courses for the business track, he began looking to transfer to a four-year Houston institution. In the end, he decided on UHD.

"UHD seemed like the best option for me. It was more streamlined as far as campus life and location," Tyler said. "And it made sense financially."

Upon arrival, Tyler was accepted into the University Honors Program. Through this program and through adherence to their standards for service to both the University and the Houston community, he has become an active volunteer in both areas, though Tyler is no stranger to giving back. His mother-in-law, former Houston Mayor Annise Parker, is CEO and president of the Victory Fund, a non-profit that finds, grooms, and promotes LGBTQ candidates for political office. His husband, Jovon Tyler, is chairman of the Board for Iconoclast Artists, a non-profit that works with at-risk teens and adolescents in the Houston and Galveston area. Tyler is active in fundraising for both of these charities, and specifically Iconoclasts has changed him for the better.

"The kids that come through this program go on to graduate high school," said Tyler. "These kids are on the edge. They are on in-school suspension and getting in trouble. We give them a voice, an outlet and a chance at something better."

With one year left at UHD, Tyler hopes to stay on this positive trajectory by growing his network, his skillset and volunteer opportunities.

"After coming from two other colleges, I've actually had a real college experience at UHD," Tyler said. "And it's really awesome. I've connected with people here that I wouldn't think that I would have."

Tyler’s successful transition from HCC to UHD is an example of both institutions’ commitment to the Houston Guided Pathways to Success (Houston GPS) initiative. This multi-institutional partnership fosters collaboration among area colleges and universities with the goal of helping students graduate on time and with less debt. Additionally, Houston GPS is focused on streamlining the transfer process between local community colleges and universities.