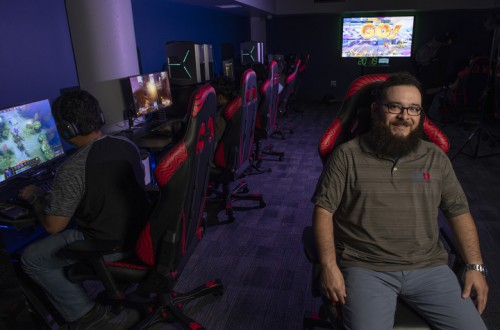 We’ve all met people who make us wonder how they fit everything into a 24-hour day. UHD's Jose Vazquez is one of those individuals.

The assistant director of Student Activities has overseen the expansion of the University's Greek Life initiative and spearheaded the implementation of the eSports Center. While balancing his many duties at UHD, it's a wonder how he plays multiple instruments for two successful Houston bands in his spare time.

Vazquez, who is a 2012 alum of University of Houston’s (UH) prestigious Moores School of Music has always been musically inclined.

“I remember playing piano on one of those toy pianos that my dad bought me and eventually my parents put me in lessons,” he reminisced. “Music was always another way to express myself, especially when I was learning English as a second language. That was difficult at times."

The LaPorte High School graduate eventually transitioned from piano to saxophone. While studying at UH, Vazquez joined forces with three fellow students to form his first band, "Nadiri." The quartet embraced many young musicians’ rite-of-passage and whole-heartedly went on tour.

“We stopped taking classes for a while,” Vazquez said. “We toured around the Midwest, our van broke down and we were stranded. It was a blast, but eventually we had to come back to reality.”

It was after this tour that Vazquez realized that he loved working with students and being part of a community. He went from working at the Aldine Public Library, where he established a book club that became popular with the youth known as “Teen Time,” to Lone Star College, where he served as a Young Adult Assistant. He did all of this while taking a full load of classes at multiple campuses and managing three choirs as head music director at a small church in LaPorte.

When Vazquez arrived at UHD in 2013 as a first-generation college graduate, he was ready to really make a difference.

“When I arrived here, I noticed that there was a need for leadership in the area of fraternities and sororities. I started looking at the policies,” Vazquez said. “I wanted to make them better and improve the Greek Life experience for students. We now have 12 Greek organizations with plans to expand.”

Long before the word “eSports” became a part of the American vernacular, Vazquez saw where the world of online gaming was headed and knew he wanted UHD to be a part of such an innovative opportunity.

The Center, filled with professional gaming chairs and headsets, sets the stage for players to hone their skills through games, including Overwatch, Dota 2, League of Legends, Heroes of the Storm, Smite, Fortnite, and others. Vazquez’s goal is to host tournaments to uncover the Center’s best players to form a varsity team by fall 2019.

“I want a place where we can promote friendship and camaraderie,” Vazquez added. “The Center offers an environment where students can come together in a safe zone and play video games.”

When he’s not mentoring students or attempting to make UHD Student Activities even better, Vazquez can be found playing with Houston’s The Suspects or managing the Selena tribute band HTX Selena.