Jan. 27 Panel Discussion to Focus on Human Trafficking in Houston 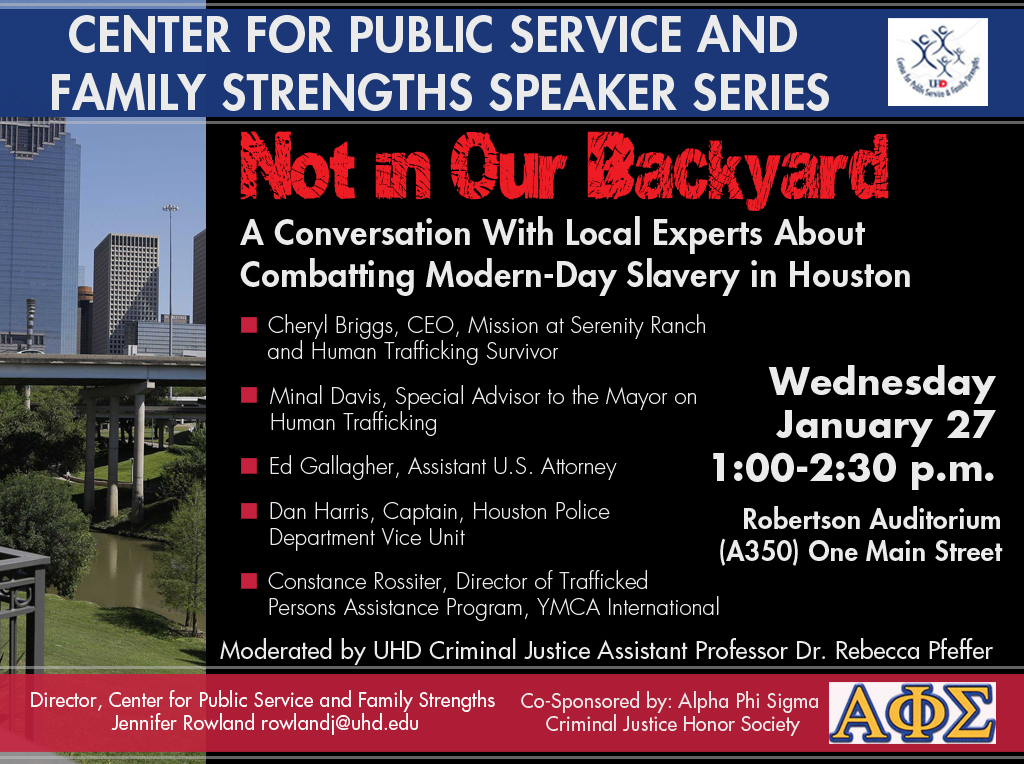 Houston-area experts on the issue of human trafficking will converge at UHD for a panel discussion to consider ways to resolve the issue locally and on a larger scale.

The program is called "Not in Our Backyard: A Conversation With Local Experts About Combating Modern-Day Slavery in Houston." The presentation and panel discussion will take place Wednesday, Jan. 27, 1-2:30 p.m., in Robertson Auditorium (A350).

Rebecca Pfeffer, Ph.D., assistant professor of criminal justice, will moderate the discussion. The following local experts will take part in the panel:

The event, which is open to students, faculty, staff and the public, is appropriate for people who are interested in learning more about what human trafficking is, where it is found in Houston and what local stakeholders are doing to address the problem. The audience will learn what Houstonians can do to identify and put an end to trafficking in our community.

UHD's Center for Public Service & Family Strengths, within the College of Public Service, and Alpha Phi Sigma, the National Criminal Justice Honor Society, are co-sponsoring the presentation and panel discussion. The program is the latest event in the center's speaker series. Jennifer Rowland, Ph.D., is director of the center.

As a global city, Houston experiences its share of issues that affect populations around the world, including human trafficking. Human trafficking is the act of compelling a person using force, fraud or coercion to provide sex or other forms of labor in exchange for money or something of value. Pfeffer says human trafficking is often referred to as a modern form of slavery.

"While the exact extent of the problem of trafficking in Houston is not known, 330 cases of human trafficking were identified in Texas last year through the National Human Trafficking Hotline," Pfeffer says. "While this seems like a lot, it likely represents only a fraction of the cases here in Texas, as cases are extremely likely to go unreported due to many factors, including victim fear or misidentification of victims as offenders."

The program is timely because January is Human Trafficking Awareness Month. The Houston area has a long-standing task force composed of law enforcement, prosecutors and victim service providers who have been working for more than a decade to address this issue locally. The Houston Police Department has stepped up its efforts to eradicate human trafficking in the recent creation of a Human Trafficking Unit. The Houston Mayor's Office has demonstrated its commitment in the 2014 creation of the position to which Davis was appointed.

In other news, Pfeffer invites the UHD community to a screening and panel event hosted by The U.S. Fund for UNICEF and A 2nd Cup. The event is about human trafficking and modern slavery, and will be held at the A 2nd Cup, 1111 E 11th St. on Sunday, Jan. 24 from 6- 8:30 p.m.

Jan. 27 Panel Discussion to Focus on Human Trafficking in Houston