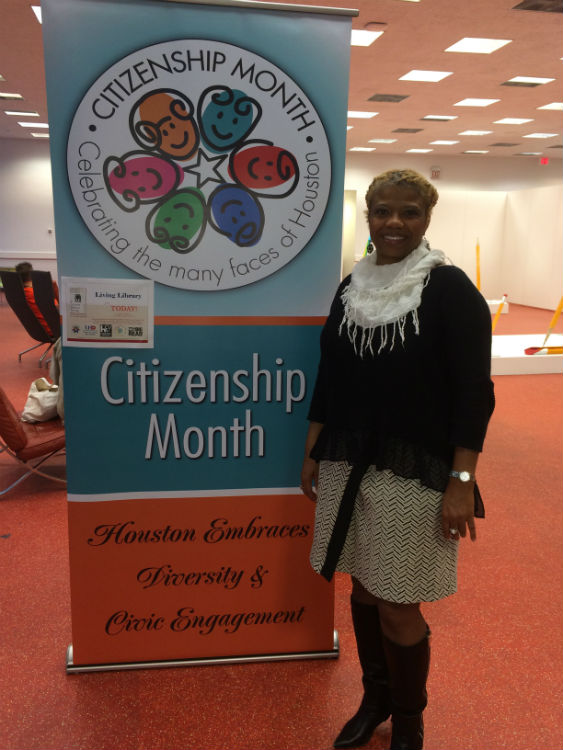 Houstonians had a chance to walk in one another's shoes at the Center for the Healing of Racism Houston's fourth annual Living Library Citizenship Month event Saturday.

"Readers" checked out Living Books - people who volunteered to publicly represent a certain segment of the community -for 20-minute conversations on various topics. Event organizers hoped that these personal conversations would foster mutual understanding and the goal was to connect strangers who might not normally have an opportunity to hear each other's points of view.

Discussion topics included information on interracial marriages, death sentence, anti-Antisemitism, and living in a sundown town, among others.

Discussions frequently turned to the commonalities among the participants, rather than their differences.

Doveanna Fulton, dean of the UHD College of Humanities and Social Sciences served as a "living book" and represented the University's Center for Critical Race Studies. She said the overall theme of the event was that everyone has a story and those stories are valuable, particularly in efforts to eradicate prejudice. "The event generated a lot of conversation about what it means to be human and how we can recognize and value the humanity of our fellow people, in spite of all our differences," she said.

While there were representatives of many cultures and social statuses, Fulton said the discussions frequently turned to the commonalities among the participants, rather than their differences. Fulton said, "It's all about how we can appreciate one another's humanity. How do we make connections? The conclusion most of us made was that humanity is about empathy - it's about relating to how another person feels, what concerns them, what makes them happy or sad."

The Living Library was first presented to the public in 2000 at Denmark's largest musical event, the Roskilde Festival. It has been adopted by organizations in Europe including Finland, Sweden, and England. It has been presented in several libraries across the United States, but Houston Public Library is the first Living Library in Texas and one of four in the country.