History Professor James McCaffrey will discuss his new book, "Going for Broke: Japanese-American Soldiers in the War Against Nazi Germany" at 2:30 p.m. April 18 in N1099.

History majors and enthusiasts should not miss this unique opportunity to hear McCaffrey's take on the American citizens of Japanese decent who were displaced to relocation camps during World War II and later allowed to fight in a segregated unit.

A synopsis can be found below:

"The Japanese surprise attack on Pearl Harbor in December 1941 pulled the United States into World War II. Young American men, including those of Japanese descent, flocked to the recruiting stations to serve in the American military. In most cases, however, the Japanese Americans were told they were not acceptable because of their ethnicity. Soon, over 100,000 Japanese and Japanese Americans, most of them natural born American citizens, were rounded up on the West Coast and forced into barbed-wire-enclosed relocation camps in the interior of the country. Their only crime was that they looked like the nation's enemy.

The Army finally relented and allowed Japanese American men to serve in the army, in a segregated unit—the 442nd Regimental Combat Team. These men, serving at first under only Caucasian officers, were sent to Europe where they earned an outstanding reputation through some of the fiercest fighting in Italy, France, and Germany."

McCaffrey is the author of eight books on the social history of soldiers, including the Army of Manifest Destiny: The American Soldier and The Mexican American War and Inside the Spanish American War. He teaches a number of upper division courses, including U.S. Military History and The Vietnam War. 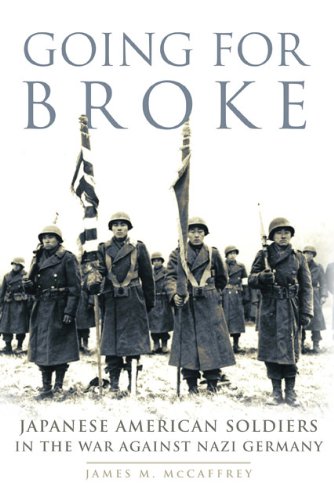