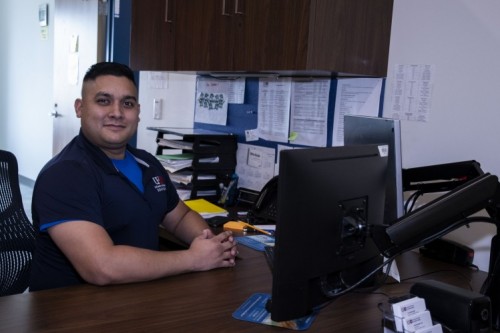 In 2017, while talking to his father, Milton Gonzalez realized he had not done enough to help his community.

“I am part of the disabled community,” he said. “It’s a community that no one decides to join. Either you are born into it or something happens. We call it the forgotten community because a lot of people don’t think about it. It is a community that I ended up joining when I had my accident and I realized I hadn't done anything for them.”

At the time, Gonzalez had lived with a disability for 12 years after a motorcycle accident when he was 19. He is paralyzed from both of his knees down and uses crutches to walk.

Gonzalez spent the first two years after his accident in rehab regaining his strength and learning how to walk again. The first-generation student eventually decided to earn his associate degree and signed up for classes at Houston Community College (HCC).

“With a disability you don’t have much of choice. Getting an education becomes a top priority,” he explained. “You understand early on that the only way to gain an advantage over your disability is by becoming educated. Technology and education level the playing field for a person with a disability.”

After that conversation with his father, Gonzalez found his first opportunity to give back to the forgotten community. He began volunteering at a Houston vocational therapy clinic one Saturday a month.

Eventually, Gonzalez graduated from HCC and transferred to the University of Houston-Downtown. He saw a flyer from UHD's Office of Disability Services asking for volunteer scribes. When Gonzalez went to the office to sign up, he met Dr. Meritza Tamez, the director of disability services at that time. She told him there was a student-worker position available and encouraged him to apply.

“Milton initially started as a student worker and quickly earned his way into a full-time position as the program assistant,” said Tamez, who is now UHD's assistant dean of students. “He proved to be an asset from the start by demonstrating dependability, adaptability, integrity, and commitment to excellence in his work and service. The UHD community benefits from having Milton as a member of the family due to his dual roles as an employee and student, as well as his positive attitude, motivation, and dedication to our students.”

As program assistant, Gonzalez takes care of numerous administration duties as well as proctoring tests. He is often the first face that new students see when they come in the door. He helps them understand what services are available and signs them up for the appropriate ones.

The Office of Disability Services provides accommodations for all students who qualify including adaptive equipment, testing centers, sign language interpreter, and advocacy.

Gonzalez’s other passion is for history and is planning to graduate next spring with a history degree. He has always had a love for history, particularly military history. However, it was not until he came to UHD that he was able to pursue his interest more in-depth.

His first course at UHD was 20th century British history with Dr. Gene Preuss during a summer session. Gonzalez said he learned more than he expected from Preuss.

Preuss noted that Gonzalez came to UHD with the makings of a natural history scholar.

“Milton is a great student and person. He’s a serious student and a genuinely nice person with a great sense of humor,” said the associate professor of history. “He’s also very generous with his time, advice, and help with other students. As a history major, he’s got a keen interest in the subject, and most importantly, is curious about the subject. For a history major, that’s an important quality. He also applies his life experiences, intellectual curiosity, and information he's learned in other classes to new subjects. Those are the qualities of a good history major.”

As the son of Mexican immigrants, Gonzalez is also interested in Mexican history. He explained he did not learn much about Mexican history growing up and was eager to take Latin American and Mexican history courses at UHD with Dr. Salvador Salinas.

“He introduced me to Mexico’s point of view and I really learned a lot,” Gonzalez said. “I learned more about my past and my historical background. I never really knew Mexican history. It was amazing.”

Salinas appreciated having Gonzalez in his classes because he was such a strong student.

“Milton is an engaged student who brings a unique perspective to the classroom,” noted Salinas, assistant professor of history. “When discussing Mexican and Latin American history in my courses, for example, Milton demonstrated strong analytical and communication skills by offering his own interpretations of the assigned readings. His participation in my courses helped other students to learn the material and contributed to a dynamic learning environment.”

Gonzalez plans to combine his interest in disability work and love for history by conducting historical research on disabilities and how they have been perceived by different societies. He said that it is a part of history many people don't like to talk about.

“Communities have looked at it as a negative thing,” Gonzalez explained. “They have shunned people or seen it as evidence of a family’s sin. Even now there is still a stigma. Being a disabled person, you always get looked at whether you like it or not. People assume you are weak when you are not. However, things have changed a lot since the 90s when the ADA laws were enacted.”

He said he fell in love with his work with the disabled community and plans to continue to working in this field.

“I see working at UHD as a privilege because I see it as helping my community first. Being at the front desk guiding incoming freshmen or transfer students from my community, that is to say, the disabled community, kind of puts us all in the same boat," Gonzalez stated. "There is a camaraderie. I feel like I am finally giving back. One of the best things is I’ve been to two commencement ceremonies. And seeing our students who have used our services walk the stage is amazing. It motivates me even more to get my degree.”