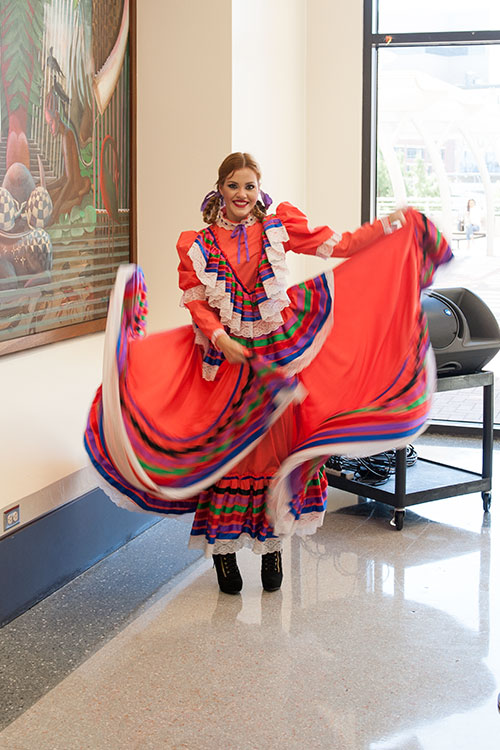 National Hispanic Heritage Month is a time of both reflection and celebration. Starting this week, the University of Houston-Downtown (UHD) will commemorate this important time of the year with a series of events highlighting the contributions and achievements of the diverse cultures within the Hispanic community.

National Hispanic Heritage Month is celebrated annually from Sept. 15 to Oct. 15 recognizing Hispanic Americans' histories, cultures and contributions to society. The official observation began in 1968 as Hispanic Heritage Week. In 1988, it was expanded to a month by President Ronald Reagan starting on Sept. 15 — the day Latin American countries Costa Rica, El Salvador, Guatemala, Honduras and Nicaragua declared their independence in 1821. The month also falls within the anniversary of Mexico and Chile's Independence Day.

History professor Gene Preuss encourages the University community to use this month as an opportunity to become more educated about Hispanic heritage and how it is reflected within America.

"It is important to celebrate National Hispanic Heritage Month to educate the community about the role Hispanics have had in shaping our nation," said Preuss. "As a Hispanic Serving Institution, it is essential that we respect the students we serve at UHD, and part of that integration of the 'town and gown' is honoring our students and their families who contributed to much of Houston's and the nation's history."

John Hudson, director of UHD's Center for Student Diversity, Equity and Inclusion (CSDEI), believes National Hispanic Heritage Month is an opportunity for the UHD community to honor and celebrate each other as equals.

"It is a tremendous privilege we have to be part of a Hispanic Serving Institution, a designation established on the progressive vision that, if we as a nation indeed honor the notion that all are created equal, then it logically follows that we must provide means of remedy for inequality, and that chief among these is access to educational opportunity," said Hudson.

UHD is celebrating National Heritage Month with several educational activities that are open to the public. Audiences will have the opportunity to explore the Latino culture through discussions, films and lectures.

This week, the celebration kicked off with a screening of the film "A Class Apart: A Mexican American Civil Rights Story." Next week, the CSDEI will host a panel discussion entitled "The Hispanic (Youth) Vote(r) in Texas - More Important Than Ever," from noon to 2 p.m., Sept. 20 and Sept. 22, in the Girard Street Building's Milam and Travis Rooms. A full list of events for the month can be found here.

"As our National Hispanic Heritage Month events move from consideration of the historical to the contemporary, from the way things were to the way things are and could be, we are challenged to seize the opportunities we have as members of our campus community," Hudson said. "We must also work toward positive change and social justice through the greater access of higher education afforded by our status as a Hispanic Serving Institution. This is our collective opportunity to work each day to make the ideal of equality for all a reality."

At UHD, Hispanic enrollment has increased by 26 percent from fall 2011 to fall 2015. Currently, UHD has more than 6,000 degree-seeking Hispanic students. In fall 2016, the UHD College of Humanities and Social Sciences launched the Latino Studies concentration.