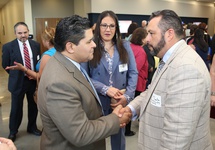 Houston Independent School District (HISD) Superintendent Richard Carranza has been on the job for just two months. The San Francisco-transplant is no doubt getting acquainted with his new community, and he got to know Houston a little better during a recent visit to the University of Houston-Downtown (UHD).

UHD Interim President Michael A. Olivas hosted Carranza during a reception on Nov. 2 in the Welcome Center. Carranza was greeted by members of the campus community, as well as supporters from around the city. Dignitaries included former University of Houston System regents Jacob Monty and Lynden Rose, and HISD Board of Trustees President Manual Rodriguez Jr., who introduced Carranza.

Carranza addressed the audience in both English and Spanish, and emphasized the need for bilingual education in the city.

He told the audience that he and his brother didn't learn English until they entered public school. They eventually became bilingual. He said that at one time it was considered a detriment when students only knew Spanish when they entered school. Now, he said, knowing Spanish while learning English is an asset for students.

While he has taken on the role of HISD's superintendent, Carranza is quick to acknowledge that he is not alone in the city's efforts to educate its children.

"When HISD's Board of Trustees voted unanimously to invite me to Houston, it was indication that this community can and will work together," he said. "We have a vision for what we want for our students. I'm just the messenger. I'm the cheerleader. But that means nothing if I am not informed by the voices of our community."

Listening and communicating, he said will help Houston's students rise above any challenges and be prepared for the world that awaits them after graduation. Whether their goals are college or a career immediately after high school, the community can make a difference in shaping students' academic outcomes.

"I want to invite everyone here to be part of a greater conversation on what we want for the children of Houston," he said. "You see, we are going to produce the best students in the history of this city because they are the future of Houston. We cannot have a world class city without a world class public education system. That's the conversation I want you to be part of."

Carranza received rousing applause after encouraging the audience to play an active role in shaping the direction of education in the city.

Olivas concluded the event by echoing Carranza's sentiment on Houston as a world class city and how UHD's student body reflects the demographic make-up of the city. He also cited UHD's many connections with HISD, including the fact that more than 500 district teachers are alums of the University.