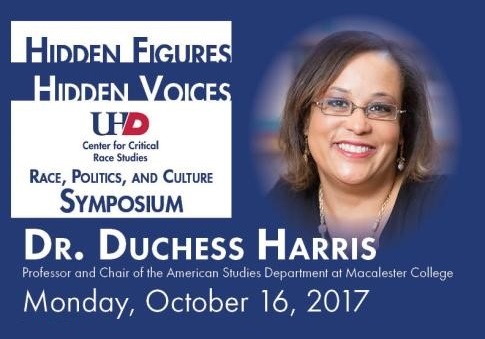 The inaugural event, "Hidden Figures, Hidden Voices," will feature a public talk and Q&A with author, academic and legal scholar Dr. Duchess Harris, professor and department chair of American Studies at Macalester College in St. Paul, Minnesota. Harris is co-author of "Hidden Human Computers: The Black Women of NASA," which tells the story of her grandmother, Miriam Daniel Mann, and other black women who made it possible for John Glenn to orbit Earth in 1962. Harris' book served as an impetus for the movie, "Hidden Figures."

"We are interested illuminating or bringing to consciousness the intersection of race, gender and the sciences," said Dr. Vida Robertson, associate professor of English and director of the Center for Critical Race Studies. "Unless we articulate the cultural politics of science, we won't be able to negotiate it until we have an open and honest conversation about it.

"There are multiple and overlapping identities," Robertson added. "It's important for us to investigate the spaces that are often not discussed as a means of encouragement. Dr. Harris' book shows how these women's humanity was being denied—because they were women and because they were black—even as they intellectually operated in the most privileged spaces in science and technology. Dr. Harris is very interested in uncovering the way in which those systems of race and gender are working inside this institution we call science."

The event's public talk and Q&A will be held in the Wilhelmina Cullen Robertson Auditorium (A350) at 6 p.m. followed by a book signing and reception in the Academic Building's Coffee House.

In the spring, the Center will host its new Scholar-In-Residence, award-winning author Dr. Bettina Love, associate professor of educational theory and practice at the University of Georgia. Look for more in a future issue of UHD News.