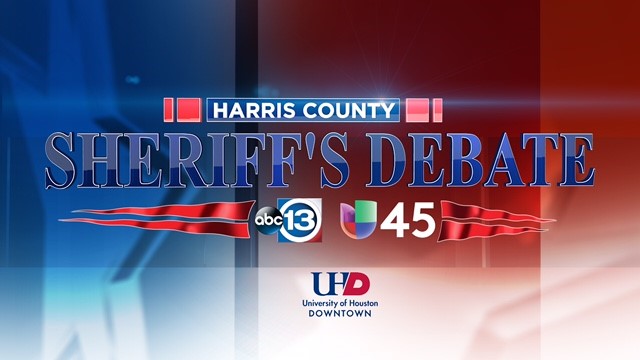 Institutions of higher learning are perfect arenas for public discourse, and this week, the University of Houston-Downtown (UHD) hosts a discussion on the future of law enforcement in Harris County.

At 6 p.m., Oct. 13, candidates for Harris County Sheriff will face off in a debate in UHD's Wilhelmina Cullen Robertson Auditorium. Republican incumbent Ron Hickman and Democrat challenger Ed Gonzalez will participate in a debate presented by KTRK ABC13, Univision 45 KXLN and UHD. KTRK reporter Ted Oberg and Univision anchor Rebecca Suarez will moderate the discussion. The event will be streamed live on the websites of both KTRK and Univision.

This event is open to the UHD community, and its producers are seeking student input for this debate. Students may submit questions to be considered for inclusion in the debate to Mike Emery, UHD director of communications. Questions must be submitted before Wednesday, Oct. 12.

"The opportunity for students to see and participate in a live debate between candidates for the position of Sheriff of Harris County is very exciting," said Barbara Belbot, chair of UHD's Criminal Justice Department. "It's one thing to read a debate transcript or a news article about candidates, but it's another thing entirely to be in the room when they explain why they're the best person for the job and debate about how best to improve our criminal justice system."

The event provides students with another opportunity to participate in a public debate between political candidates. In September, UHD Honors Program students were featured in presidential debate coverage on FOX26. It is the second major political debate to be conducted on campus in the past year. In December 2015, UHD hosted a debate between Houston mayoral candidates Sylvester Turner and Bill King.

"I am delighted that UHD is becoming known as a significant host and venue for important discussions that affect the important issues of our day," said UHD Interim President Michael A. Olivas. "I would like to increase our visibility and be the go-to forum for the many political, cultural and artistic programs that enrich the Houston community. Exposing our students to major events is a desirable feature of a rich UHD life, and is the next step in our no longer being Houston's best kept secret."