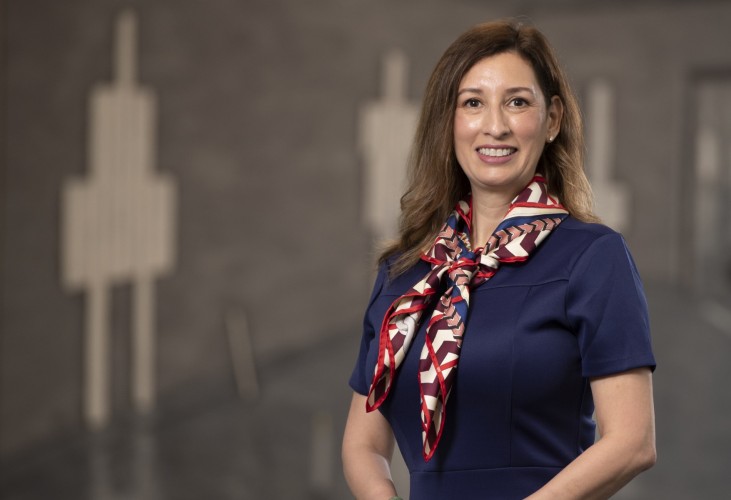 “I am UHD,” Ruby Muñoz Dang proudly said, commenting on the institution’s impact on her life and career. “I am where I am today because of this University.”

Since graduating from the University of Houston-Downtown (UHD) with a bachelor’s degree in finance in 1994, Muñoz Dang has been a part of the asset management firm, Garcia Hamilton & Associates (GH&A). It was her first job out of college, and she’s been fortunate to have remained there for 25 years.

During her time at GH&A, she has served in many roles. Ultimately, she rose through the ranks and is now a senior partner at GH&A and serves as its director of Marketing and Client Services. Not one day in the office is the same, and that’s a good thing, she said.

“There’s no such thing as a ‘normal’ day in our office,” Muñoz Dang said. “Things are always changing. We try to ensure we communicate with our consultants … and I have to network to bring more assets to the firm. Every day is a new adventure, a new challenge, and ultimately, a new success story for our company.”

Credit her longevity and success at GH&A to tenacity and a willingness to learn. Those are traits she honed in the classrooms at UHD and while growing up in Houston’s southeast side of town.

The daughter of Mexican immigrants Gilberto and Emma Muñoz, she and her siblings (twin brother Alan and older brother Edgar) learned the meaning of hard work at an early age. Her father was a plumber and her mother worked as a seamstress, both physically demanding jobs.

“Their sacrifices provided me with many opportunities,” Muñoz Dang said. “I thank them all the time. It takes courage to come to a new country and also work very hard to provide for a family. They continue to inspire me.”

Her parents certainly motivated her to seek out higher education opportunities. According to Muñoz Dang, her mother and father believed in both working hard and in the value of education. After graduating from Milby High School, she weighed her college options.

She started at Houston Community College, then began to explore Houston’s universities. Some local institutions were too large, and she didn’t want to get lost in a sea of students. Others were out of her budget, but she soon identified a university that would accommodate her financially and personally – UHD.

“It was a perfect fit,” she said. “There were people who looked like me and students I could relate to. Most importantly, I could afford it.”

One of the selling points of UHD was the service provided by the staff and faculty, she said. The financial aid paperwork was a bit overwhelming, but UHD admissions staff members immediately lent a hand. She credits the guidance of counselors, advisers and other staff members for helping her feel welcome at the University.

“Right off the bat, I felt that I could succeed here,” she said. “Everyone was helpful. The staff went the extra mile to understand the students and help them in any way.”

During her time at UHD, Muñoz Dang worked full time as a bank teller. She recalls those very long eight-hour work days, then late afternoon and evening classes. A strong work ethic and a desire to learn helped her complete her bachelor’s degree.

Now, Muñoz Dang imparts the lessons learned from her parents (who still reside in the same house in which she grew up) and from UHD to her own children—Christopher, 15 and Claudia, 13. Along with husband Joe Dang, she inspires them to also work hard and to value higher education.

“I also try to emphasize ‘paying it forward’,” she said. “UHD did that for me with the support I received here. I look at this University and see myself in the faces of the students. In fact, I met a recent graduate and am now trying to help her in her career. UHD teaches you that … to not only succeed yourself, but to help others succeed. That’s what makes it a gem in our city.”