Students in the University of Houston-Downtown’s Greater Texas Foundation (GTF) Scholars Program recently gathered for their Fall Retreat on campus, which was highlighted with a keynote address by 2011 alumnus Isaac Valdez, program manager of Radiation Oncology at MD Anderson Cancer Center.

Valdez earned his bachelor’s degree from UHD in Applied Mathematics and recently received his master’s from the University of Texas at MD Anderson. He also was featured as part of a panel of speakers during UHD’s Gator Grit in STEM series last year. 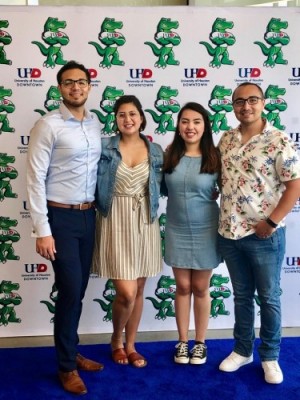 Three of Valdez’s family members and UHD graduates, wife Michellee Gutierrez Valdez, sister-in-law Edith Aldaba Valdez and brother Martin Valdez, were in attendance and shared their stories of success with the students. All of them were involved in various co-curricular activities on campus.

The GTF Scholars program is open to any student graduating from any Early College High School in Texas. UHD is one of only eight institutions in the state offering this program.

Seventy-five students were among two cohorts of students in attendance at the UHD retreat, where they participated in activities focusing on how they can better network with others and learning about peer mentoring and academic coaching opportunities. At the end of the event, students were presented with their GTF Scholar medals.