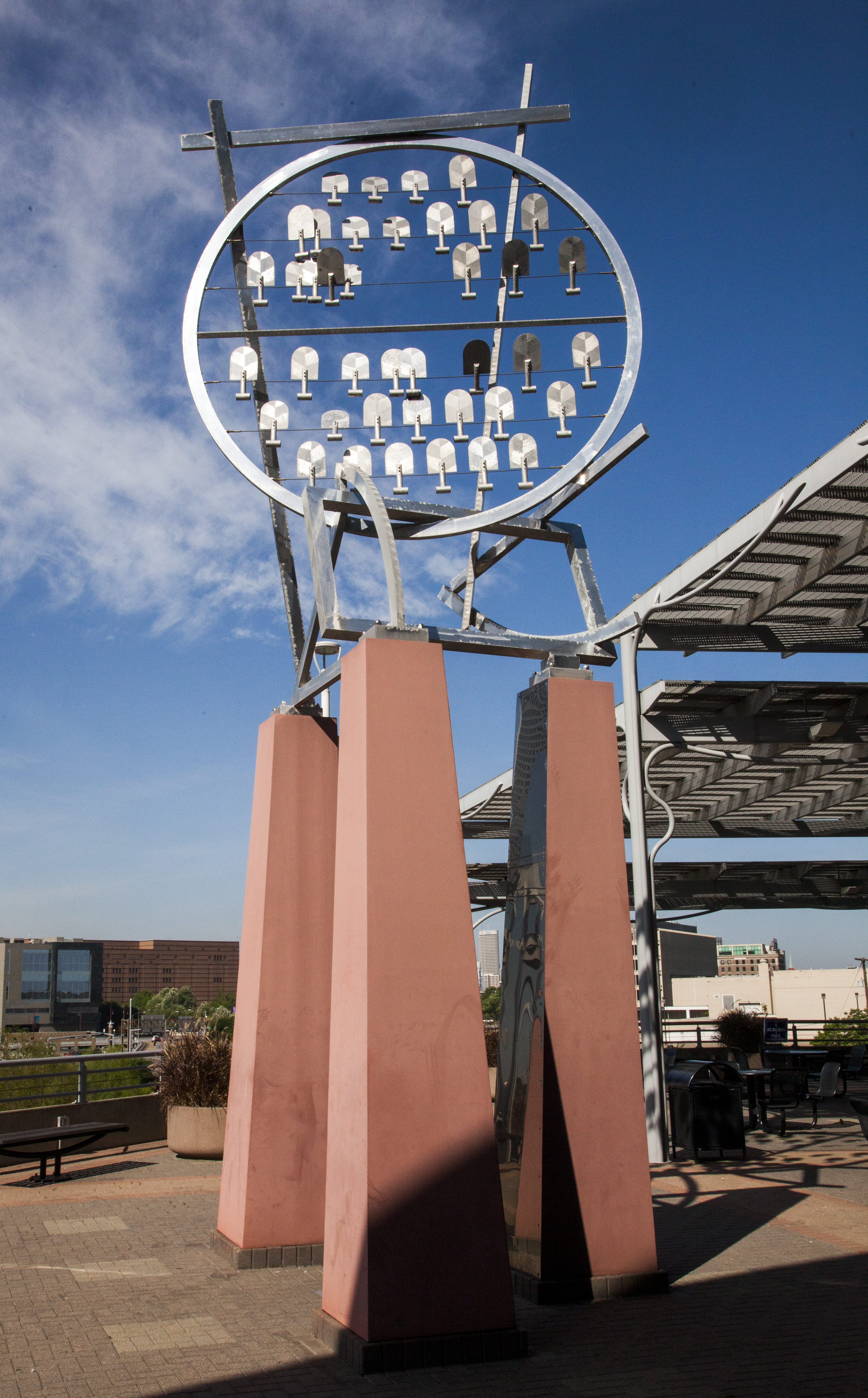 Located in the heart of the Houston arts community, University of Houston-Downtown (UHD) is home to a public art collection that highlights diversity, documents Houston's history and underscores a rich academic student experience. Featuring over 50 unique pieces created by talented and notable artists, the UHD collection can be found in the hallways, meeting rooms and public spaces in every building on campus.

According to Mark Cervenka, associate professor and director of the UHD O'Kane Gallery, the collection "illustrates social and cultural history as well as individual expressions of the human experience."

"I think as a whole, the works reflect many of the disciplines of the University and offer visitors a message that suggests openness, community interaction, and a breadth of knowledge and exploration within the University," Cervenka added.

The collection is part of a larger University of Houston System (UHS) initiative established in 1969 dedicating one percent of the construction cost of all future building projects for art.

"UH was the first state institution in Texas to initiate a percent-for-art program," explains Mike Guidry, UHS curator of public art. "UHS currently boasts one of the largest and most impressive University art collections in the country, with more than 500 works by local and international artists.

A snapshot of the artwork can be found simply by walking the main hallways. The third floors of One Main Building, the Academic Building, and the Welcome Center are home to several prominent pieces.

Well known to current students, faculty, and staff, John Biggers' Salt Marsh anchors the lobby of the Academic Building. A substantial acrylic on canvas, the piece was commissioned in 1996 to Biggers, an African American muralist and one of the founders of the art department at nearby Texas Southern University.

"Biggers' mural is treasure and presents visitors with a vision that implicitly links people and cultures," explained Cervenka.

Hanging high above the Wilhelmina Cullen Robertson Auditorium facing the South Deck is Rachel Hecker's acrylic on birch panels, Tailgate, which references themes of power, nature and technology. Hecker is an associate professor of art at the University of Houston (UH) and is influential in the Houston arts community.

On the University's South Deck is John Scott's iconic sculpture in aluminum, Prayer Meeting. Well known for his work in New Orleans, Scott briefly relocated to Houston after Hurricane Katrina. Prayer Meeting was installed in 1996, and according to the artist, is symbolic of the rhythmic patterns of paper fans used by parishioners of rural southern churches in the days before air conditioning.

One of the most recent additions to the UHD third floor art walk is Trenton Doyle Hancock's LEGENDS. This striking 29- by 36-foot Plexiglas™ wall installation is an arrangement of painted panels prominently ascending the north wall of the Welcome Center reception area. Hancock's prints, drawings, and collaged-felt paintings work together to tell the story of the Mounds—a group of mythical creatures that are the tragic protagonists of the artist's unfolding narrative. The piece is a metaphorical message to students: Create your own path and become your own LEGEND.

The fourth floor of the One Main Building is another good spot to view a vibrant display of paintings and prints, as well as a glass etching.

Hanging near the circulation desk in the W.I. Dykes Library is a powerful oil on canvas by renowned San Antonio artist Vincent Valdez titled One in a Million. Created in 2007, the statement piece is true to form for Valdez as it speaks to the artist's self-described vision, "to interpret and respond to the modern world."

The W.I. Dykes Library is also home to Manu Languidly Stirs Songs in The Grip of Shadow and Light, a stunning work in glass by artist Bert. E. Samples. The piece, which references the four elements—earth, air, fire and water—was installed in 2011 and is composed of dichroic film on sandblasted glass. Impressive at 55×188 inches, it forms a semi-opaque window between study areas. Samples is a founding board member of Project Row Houses, a community-based arts and culture non-profit organization in Houston's northern Third Ward, one of the city's oldest African-American neighborhoods. A native Houstonian, he earned a master of fine arts degree from UH and a Core Fellowship at the Glassell School of Art, the teaching institute of the Museum of Fine Arts, Houston.

The Academic Building is home to a collection of lithographs by Steven Besselman, depicting the history of Houston and Galveston during the 1970s and 1980s. This understated collection of over 15 prints is split among the hallways of the fourth, sixth and seventh floors and features Houston landmarks including schools, government and public buildings, homes, churches and businesses. Several prints also feature historic locations in Galveston. Besselman moved to Houston in 1976 from St. Charles, Missouri, where he applied his talent to documenting Houston's present and past on paper.

Some of the campus' most impressive artwork is housed in the College of Business.

Jacob Hashimoto's Cloud Deck, a fluid 'kite' structure that frames the Houston skyline, greets visitors to the Shea Street Building's four-story atrium. Visibility from both inside and outside the building played a role in conceptualizing and designing the piece, commissioned in 2010. "I wanted people to have this sensibility…you could see through the piece to the city and see through the building to the piece," the artist explained. Hashimoto is a New York-based artist who creates lightweight three-dimensional structures comprised of thousands of miniature 'kites'—bamboo-stiffened rice paper hexagons suspended with nylon fishing line.

The Shea Street Building is also host to Provisional Space, a series of 10 paintings by Australian artist Janaki Lennie. Installed in 2007, Lennie describes the series as, "tracing an arc of sorts from the vegetation of the neighboring bayou with its plethora of sheltering overpasses, leading the eye up over the city skyline to the sublime forms of the freeway super-lights and gently back to earth and the mundane in the forms of billboards and concrete pillars."

The art walk continues two blocks north to the lobby of the Commerce Street Building, site of Justin Berry's Stilt Houses. This mixed media installation, gifted in 2005 by Occidental Energy, features a cluster of white houses in various heights and visible by Commerce Street passersby.

From here, simply turn around to catch the colorful impact of work by UHD professor, painter, and printmaker Floyd Newsum. Newsum's installation, Contemplating Success, includes a 15-foot mural highlighting each of the four floors of the Commerce Street Building.

"I use bright and contrasting colors as well as symbolism to create a feeling of hope and achievement," Newsum said. "I believe the human spirit can overcome great odds when given the opportunity to achieve."

For a comprehensive description of all the art on campus, visit UHD Art.