Age is just a number to two graduating Gators from the University of Houston-Downtown. And, another spring graduate may have lost his sight, but remained focused on completing his degree.

Harold Gates and Linda McCullum will be among the 1,400 graduates earning degrees at UHD’s May 18 Commencement ceremonies at Minute Maid Park. They’re proof that higher education is attainable at any stage of life. Meanwhile, Wayne Lake will earn his bachelor’s degree in spite of losing his vision. 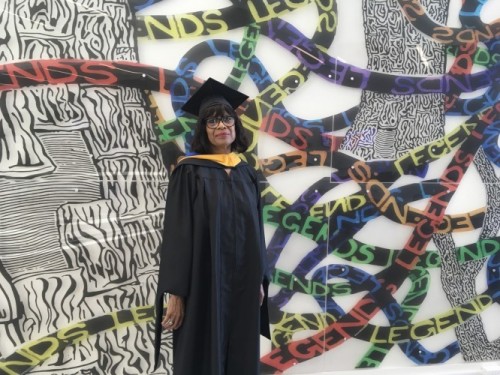 McCullum, 67, will earn her master’s degree in criminal justice during UHD’s 10 a.m. ceremony on Saturday. She joked that she’s been in college “most of her life.” Her journey to receive a degree began after graduating high school in Mississippi. Like many working students, McCullum would start college, then take a hiatus to attend to family and personal matters. It wasn’t until she relocated to Houston later in life that she began focusing on finishing what she started.

“I want to make a difference in the world,” she said. “Education will help me do that. My parents didn’t finish high school or attend college, but they were big on education. I took a few detours in my life, but I made it to this moment. Now, I want to help people.”

She credits UHD and the College of Public Service for their support, and hopes to work with at risk juveniles. Her advice to anyone who feels that college is out of reach due to age or life’s circumstances?

“You can do it,” said McCullum, who works as an in-class support teacher at Cypress Creek High School. “Don’t let age stop you. The same opportunities that are available for young people are available for older people too.” 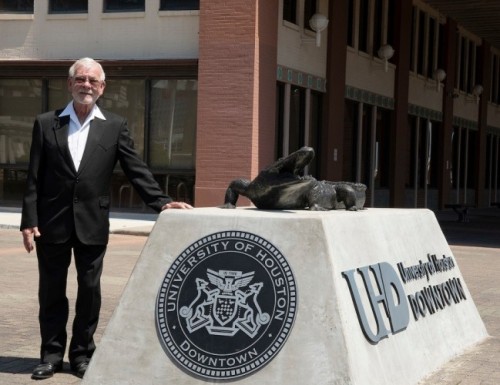 Fellow graduate Harold Gates knows this firsthand. At 75, he will be the oldest graduate this semester and will walk the stage during the 4 p.m. ceremony to receive his Bachelor of Science in Interdisciplinary Studies Degree (from University College).

Gates grew up in Trinity, Texas and moved to Houston in 1958. He began taking college classes in 1968. Life, however, interrupted his academic aspirations. After starting and stopping school several times, Gates decided to focus on running his HVAC company, Gates Air Systems. When he retired, his daughters (one of which, Deborah Rogers, is a UHD alumna) suggested that he and his wife (high school sweetheart Frances Gates) return to school. They did just that and earned associate’s degrees at Lone Star College. Gates’ Lone Star advisers told him he needed to complete 18 hours to earn his bachelor’s degree … and UHD was the perfect fit.

According to Gates, retirement is a time for growth. Now that he’s completed his degree, the door is open for further opportunities to gain knowledge if not teach others. 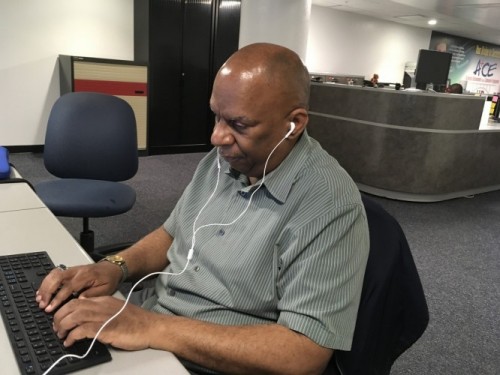 Lake, 59, also will graduate during UHD’s 4 p.m. ceremony. He’ll earn his bachelor’s degree in history. A native Houstonian, he was born with aniridia (absence of the iris) and eventually lost all of his sight in 2014. He discovered UHD in 1992, took a break and returned to complete his degree.

“The atmosphere is friendly, the classrooms are small, and the professors are inspirational,” he said.

He also credits UHD for advocating for students with disabilities. He said the University’s Office of Disability Services was particularly helpful during his time at UHD. Likewise, the support of faculty and staff, and resources such as the Writing and Reading Center were essential in his academic success.

“UHD has been there for myself and other students with disabilities,” he said. “I am very grateful to this university for helping me complete my degree.”

Lake isn’t done with UHD quite yet. He plans to pursue a master’s degree in nonprofit management with the goal of working for an organization that supports the deaf and blind. He wants to help others with disabilities realize their dreams of earning high school diplomas and college degrees, he said.

“The challenges of disabilities can be overcome,” he said. “It’s about attitude. Being proactive and positive can help anyone…with any disability…earn their degree.”