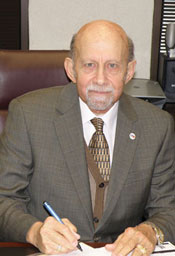 George Pincus, former dean of the College of Sciences and Technology and faculty member in the Department of Computer Science and Engineering Technology, passed away yesterday.

Pincus, a professor of structural analysis and design, came to UHD in 1996. He authored over 50 journal articles and two books and received several prestigious awards, including the Daniel Terrell Award from the Kentucky Society of Civil Engineers, the Kittinger Teaching Excellence Award from the UH College of Engineering, Engineer of the Year in 1990 from the New Jersey Society of Professional Engineers, and the Hispanic Engineer National Achievement Award in Higher Education. During his tenure as dean, the UHD Scholars Academy was founded and has awarded over $6 million in scholarships to more than 1,000 undergraduates in the College of Sciences and Technology.

"We lost a valued member of the UHD family recently with the passing of George Pincus," said UHD President Bill Flores. "He made valuable improvements to the College of Sciences and Technology during his tenure as dean and had since served his department and students faithfully as a faculty member. Our thoughts are with his family, friends and UHD colleagues during this time."

A graveside service will be held at 1 p.m. Aug. 19 at Emanuel Memorial Park, 8341 Bissonnet St (between Gessner and Fondren Streets), Houston, TX 77074. Arrangements are being handled by Levy Funeral Directors. If University colleagues and friends wish to send flowers, contact Flowers by Nino at 281-873-6466.